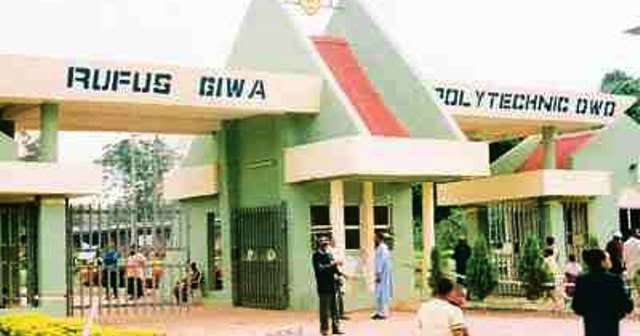 This may not the best of times for members of staff of the Ondo State-owned Rufus Giwa Polytechnic, Owo, as they are currently being owed ten months salaries arrears by the management of the institution.

The pains of the staffers would be better appreciated when one considers the high cost of foodstuffs and other essential commodities needed for survival presently.

Workers in the institution have cried out to the governor of Ondo State, Arakunrin Rotimi Akeredolu, SAN, expressing their displeasure in the running of the school’s administration in the hands of the Banji Alabi-led Governing Council and Gani Ogundahunsi-led management.

Recall that two weeks ago, Governor Akeredolu, as his second term in office kicks off, dissolved all parastatals and boards in the state; a development which ordinarily should have led to the dissolution of the Governing Council of Rufus Giwa Polytechnic; however, CompassNG gathered that the RUGIPO Governing Council remained in office, claiming that it is a statutory board.

Findings by CompasNG, however, revealed that there are only five statutory boards in the state, which do not include the Rufus Giwa Polytechnic’s Governing Council.

In a chat CompassNG, a senior administrative staff of the institution, who doesn’t want his name mentioned due to fear of victimisation by the institution’s authority, revealed that the Council and the management have invited dignitaries, far and near to the school within this week to showcase their self acclaimed achievements in order to cajole the governor for their continuity.

He said, “Despite the precarious financial situation of the school resulting in inadequate fund to pay salaries and many more, these their invitees will go back with ‘brown envelopes’ at the expense of staff salaries.”

He alleged further that some money from the left over of TETFund was shared among some principal officers of the institution and the Governing Council Chairman recently.

“We beg the peoples’ governor to come to the rescue this institution from total collapse by setting up a very powerful investigative panel to see to the running of the school. We are really suffering in their hands.”

Efforts to reach out to the Public Relations Officer, PRO, of the institution, Mr S.O. Ojo proved abortive, as his line wouldn’t connect.