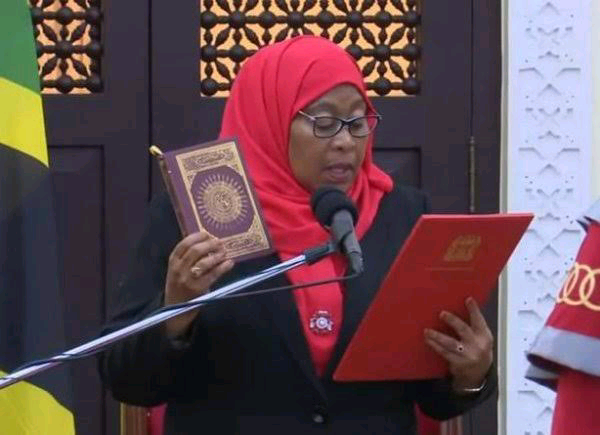 Following the death of Tanzania’s President John Magufuli last Wednesday, the vice president, Samia Suluhu Hassan has been sworn-in as the new President.

Hassan took the oath of offic at exactly 10:15 am on Friday, at State House in Dar es Salaam, Tanzania, succeeding President Magufuli who died on Wednesday.

In attendance at the swearing-in ceremony were: former President Jakaya Kikwete and Zanzibar’s Hussein Mwinyi.

Dressed in red and black, the new President of Tanzania inspected a guard of honour mounted by the Tanzania Defence Forces.

A statement by Tanzanian State House spokesman, Hassan will address the nation and chair her first cabinet meeting.

She is expected to serve the remaining term of Magufuli, which started last October, when he was re-elected.

Hassan has been Magufuli’s deputy since 2015, and is expected to nominate a Vice President from the mainland, given that she comes from Zanzibar, in line with the Tanzanian Constitution.

The swearing-in was low key, without the attendance of heads of state, who usually grace such occasions.

Following Magufuli’s death, opposition leaders had called for the immediate swearing-in of Hassan, to avoid a power vacuum.

Tanzania’s opposition leader Zitto Kabwe had on Thursday said the Vice President needed to be sworn-in accordance with the Constitution, saying, “The VP has to be sworn-in immediately,” in a chat with Reuters on Thursday morning.

He added, “The Constitution doesn’t allow a vacuum, once it was official that the President has died, the next step was for the Vice President to be sworn in.”