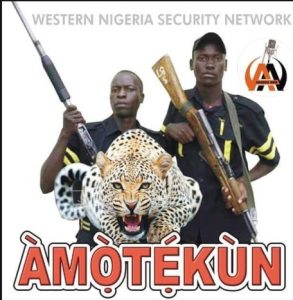 The South-West zonal chapter of the Peoples Democratic Party, PDP, has called on governors of the six states in the geopolitical zone to expedite action on the Western Nigeria Security Network codenamed ‘Operation Amotekun’ by recruiting and deploying personnel to the nooks and crannies of the South-West region.

The party also lamented the inability of the President Muhammadu Buhari-led government to curtail the growing insecurity in the country, describing it as weak and effeminate in preventing insecurity and bringing to justice rampaging killer-herdsmen attacking people across the country.
These positions were canvassed by tge South-West PDP in a statement signed by its Zonal Publicity Secretary, Mr. Ayo Fadaka, where Governors Rotimi Akeredolu, Ondo; Kayode Fayemi, Ekiti; Gboyega Oyetola, Osun; Seyi Makinde, Oyo; Babajide Sanwo-Olu, Lagos; and Dapo Abiodun, Ogun; for inaugurating ‘Ooeration Amotekun.’
While encouraging the governors to take swift and decisive actions on the security and safety of the region, the PDP, however, noted that the encouragement became imperative due to the fact that “the nation today totters on the fringes of a combustion that poses dire consequences to Nigeria and its people.”
Fadaka added in the statement that the Presidency has remained weak and effeminate in preventing danger in the land, a development which he said was even attested to by the Senate last week.
The statement reads in part,“Therefore, it is time that the Amotekun initiative was pushed to its next level of operation through recruitment and deployment of personnel through the nooks and crannies of the South-West.
“We state this after taking due cognizance of a press statement by the Miyetti Allah, the herders’ trade union, taking responsibilities for the recent genocide in Plateau State, and further claiming that the entire nation is their possession.
“That statement is absolutely irresponsible and capable of inciting untoward responses from other sections of the country. We continue to remain perturbed that in spite of so many acceptances of responsibilities for genocidal actions by Miyetti Allah, President Buhari’s government continues to fail in bringing these criminals to justice.
“We, however, wish to educate the group that the South-West and even slightly beyond, belongs to the Yorubas and no group or people can dispossess us of our heritage and this is supported by history.
“We also call on the proper Fulani leaders to begin to speak out against the actions of these characters in the interest of our nation.”
The PDP, while also urging the six South-West governors to expedite actions on measures that will rid their communities of elements, who pose threats to the safety and security of the people of the South-West, said, “We urge governors in the South-West to initiate security measures that will rid our communities of elements who pose a threat to our security and safety immediately.
“We also call on our Obas to begin to take concrete traditional security actions that will protect and maintain the peace of our region. Our peace is priceless and it must be maintained at every cost.”