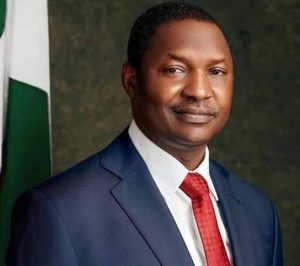 Oyo State Attorney General and Commissioner for Justice, Professor Oyelowo Oyewo, has said that the intervention of the Attorney General of the Federation and Minister of Justice, Abubakar Malami, SAN, on the dissolution of local government leadership in Oyo State was selective and as a result of lack of proper briefing.

Stating this while appearing on a Channels TV programme, Sunrise Daily, Oyewo maintained that the AGF was not properly briefed on the local government situation in Oyo State.

He said that the dissolved council chairmen were not properly constituted, having emerged from an election held in disobedience to an existing court order.

He said, “If he (the AGF) were to be aware of the fact that the matter was subjudice, probably he would not have taken such wanton, liberal interpretation of his powers. His powers are guided by law, the Constitution of the land and as interpreted by the court.”

The professor of Law and former Dean of the Faculty of Law, University of Lagos added that the AGF lacked the power at large to enforce judgment without going through the process of the enforcement of judgment in compliance with the rules of the court that gave the judgment.

Saying that Malami’s actions were partisan and not based on the Constitution, Oyewo noted that though many All Progressives Congress, APC-controlled states were operating caretaker committees and had dissolved elected local government leadership, policemen have not been sent to enforce “anybody’s rights as it were.”

He also stated that though his office was not served with the AGF’s later dated January 14, which only came to its notice on January 22, but due to the seriousness of the letter, it penned a rejoinder to the AGF in where the following facts were clearly stated:

“One; there is no such Supreme Court judgment against Oyo State. Two, the AGF does not have power, at large, to be enforcing judgment without going through the process of enforcement of the judgment in compliance with the rules of the court that gave the judgment.

“As if that was not alarming enough, a letter was written through the Inspector General of Police giving a direction that was supposed to be given to the chairman of APC in Oyo State and the chairman of ALGON to, as it was, reinstate local government and LCDA chairmen who have a matter in court against the Oyo State government. And the matter at that time was, and still is, at the Court of Appeal.”

Averring that the AGF’s actions were clearly not based on law or the Constitution of the land but purely partisan, Oyewo added, “Basically, the AGF will have his reasons, but they are not based on the Constitution. They are not based on law, because the action was so partisan. You do not write a letter to the chairman of a party in a state directing the governor to review. We run a federal system of government. If there is anything, and this has been settled by the Supreme Court, even under the regime of President Olusegun Obasanjo, where there was a dispute as to the creation of local governments and the government withheld the funds of Lagos State, the Supreme Court came out. If you have such issues you go to court and that was what we have done.”

Responding to the question on whether Governor Seyi Makinde had the powers to dissolve elected local governments chairmen, Oyewo noted that the election that brought the chairmen in was null and void, as it was conducted against an existing court order, which invalidated the constitution of the Oyo State Independent Electoral Commission.

He added that the Makinde administration inherited litigations between the sacked APC local government chairmen and the APC-controlled state government under Senator Abiola Ajimobi and that the existence of a stay of execution on a judgment secured by the sacked chairmen left a vacuum in the local councils.

He stated that Governor Makinde only filled the vacuum pending the resolution of the matters or the time his administration could conduct a proper election into the local governments.

When asked whether there was a possibility of the sacked chairmen coming back to office, Prof. Oyelowo said what the state government did was to dissolve them and that if the court eventually pronounces the government’s action null and void, Governor Makinde as someone who believes in and maintains the rule of law would not act in contravention.

Oyewo said, “As it is now, the local government matter is at the Court of Appeal; it is coming up now on February 27. The one that we have got is coming up on the February 5. All things being equal, before the end of the first quarter, everything should be resolved. And we should be able to conduct a free and fair election into the local governments.”