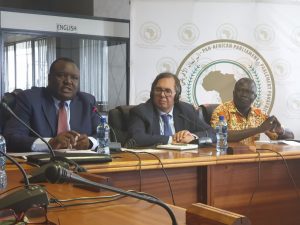 Pan-African Parliament, PAP, the legislative organ of African Union, AU, headquartered in Midrand, South Africa, has said that the sittings of its Permanent Committees, billed for February 27 to March 7, would not be affected by the latest epidemic known as coronavirus.

Stating that the committee sittings would hold as scheduled, despite the fear sparked by the coronavirus outbreak globally, PAP noted, “The Government of South Africa has assured the nation of its solid response against the virus.  Screening of travelers, especially those arriving from destinations in Asia, has been intensified at all South African ports of entry, following the outbreak of the deadly coronavirus in China.”

PAP said that arrangements would be made to complement the measures put in place by the South African National Department of Health to “ensure any potential threat is addressed in time.”

PAP’s Vice President, Fortune Charumbira and Vice President Bouras Djamel, were said to have taken time to address the issue among others with the PAP Secretariat staff during their rotation week in Midrand.

PAP President, Rt. Hon. Roger Nkodo Dang, was quoted as saying, “We can assure our Members of Parliament that the Secretariat will do all in its power to  ensure that the sitting of the Permanent Committees holds successfully amid this global health scare. We however encourage honorable parliamentarians to ensure that they carry all their health certificates and that they are up to date with all the vaccinations they ought to have taken.”

World Health Organization, WHO, which describes a coronavirus as a family of viruses that “include the common cold, Severe Acute Respiratory Syndrome SARS, and Middle East Respiratory Syndrome, MERS,” also declared the outbreak as a global public health emergency.

China’s National Health Commission reportedly disclosed on Monday that there are now 17,205 confirmed cases in mainland China, 15 in Hong Kong, 8 in Macao and 10 in Taiwan. About 150 cases have been confirmed in 23 other countries outside China in the Asia-Pacific region, North America, Europe and the Middle East.

No fewer than 361 people have been killed in China and one in the Philippines by the fast-spreading new coronavirus, which emerged in the Chinese City of Wuhan towards the end of December, 2019.

So far, there are no verified cases of infection of the dreaded mysterious virus on the African continent.