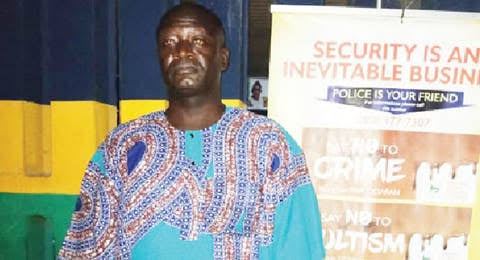 …Procures Abortion For Her Three Times

A Nigerian pastor, 44-year old Oluwafemi Oyebola, of the Ogo Oluwa parish of the Christ Apostolic Church, Owode, Yewa area of Ogun State, has turned his daughter into a live-in lover and impregnated her a third time.

Pastor Oyebola has equally procured several abortions for the daughter in the past, according to information made available to CompassNG.

The daughter, names withheld, whose father had been having the incestuous relationship with, since age 19, shortly after the death of her mother in 2015, reportedly lodged a complaint at Owode Divisional Police headquarters.

Narrating her ordeal to the police, she claimed that her father had been forcefully having carnal knowledge of her since 2015 when she was 19 years old, adding that she got pregnant for her father three times and he took her to a nurse where the pregnancies were evacuated. The report led to the arrest of the randy pastor.

She further told the police that Oyebola procured family planning for her to prevent further pregnancy, after the third abortion.

Confirming the incident, the Ogun State Police Command spokesman, DSP Abimbola Oyeyemi, said the man was already in their custody, adding, “Having realized that her father is all out to ruin her life, she ran away from the house and reported to a non-governmental organization, NGO, Advocacy For Children And Vulnerable Persons Network, consequent upon which she was taken to Owode-Egbado (now Yewa) police station to complain.

“Upon the report, the DPO Owode-Egbado division, SP Olabisi Elebute led her detectives to the pastor’s house where he was promptly arrested.

“On interrogation, the suspect made confessional statement that all what his daughter said is nothing but the whole truth.”

Oyeyemi said the Police Commissioner, Mr Kenneth Ebrimson, has ordered the transfer of the suspect to anti-human trafficking and child labor unit of the State Criminal Investigation and lntelligence Department in Abeokuta, adding that further investigation into the crime continues, insisting that the ‘father-husband’ will be prosecuted on conclusion of investigations.