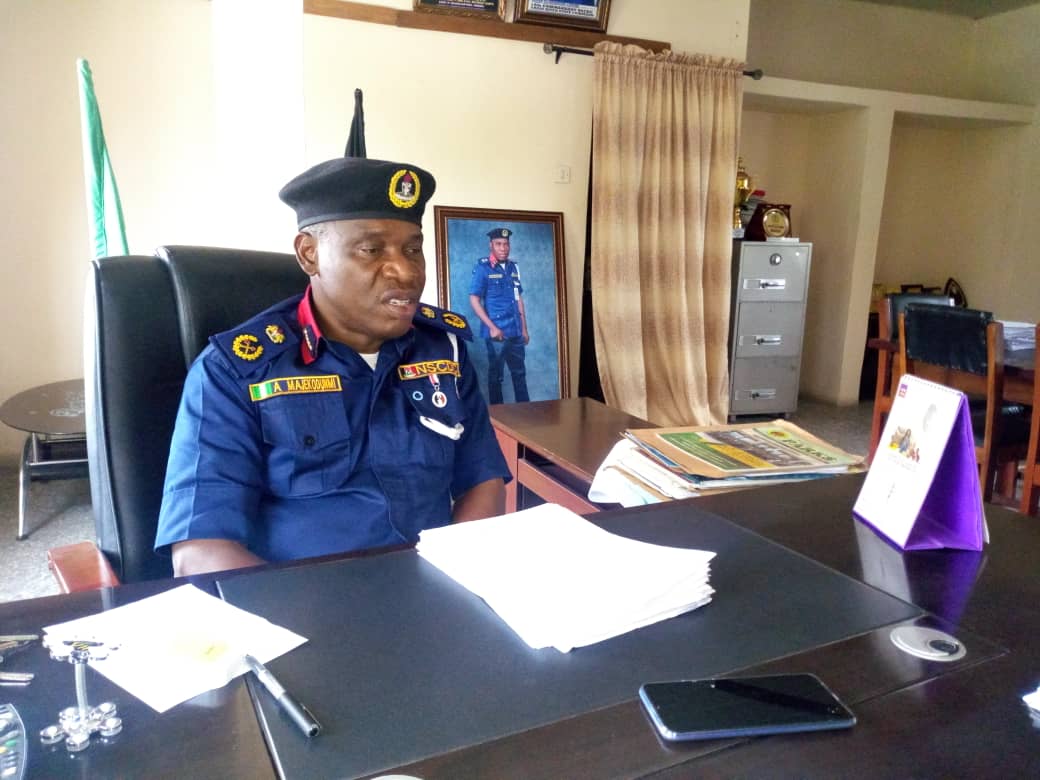 Abidemi Majekodummi, is Commandant, Cross River State command of the Nigerian Security and Civil Defense Corps, NSCDS. His six-month sojourn in the state has yielded positive results, which include, arrest of transformers thieves, child traffickers, hard drug peddlers and others. In this interview, he gives a breakdown of modest achievements since his arrival in the state. NSAN NDOMA-NEJI brings the excerpts:

Since you came, how many criminals have you arrested?

Well, of course the Civil Defence is to ensure that the pipelines network of petroleum products are protected as part of critical national assets and infrastructure. The command under my watch have arrested five people and put them through trial, the court has adjudicated in those cases, suspects were sentenced and imprisoned at least five suspects in that respect were convicted and sentenced. In this side of the country, trafficking in children is very rampant, sending children to engage in child labour, menial work and all that. We have also intercepted two gangs of criminals alleged to have been involved in child trafficking, which is a crime against the state nd of course against a lot of conventions, and international protocols. We work in partnership in that respect with NAPTIP and we have duly handed a number of cases to them and have also handled in my short stay here, cases of child trafficking that we had to work in concert with the Ministry of Health here. We had to finally hand over such cases to NAPTIP. Even as I speak to you, I have in custody, with investigations ongoing, a set of criminals who specialise in tampering with transformers and other power installations; and in this particular case under reference, they went to bring down a suspended transformer, they balkanized it, removed vital components, just to make unmerited gains. The case is still under investigation, because preliminary conclusion suggests that there is a wide network involved and of course, apart from the actual people who go out to sabotage electrical installations there are also receivers as middle men who finally take them to those people who will buy and of course recycle those products by selling them back. I have a suspect in my custody in that respect, and of course through sustained intelligence activities, we nabbed three suspects yesterday, engaging in illicit trading in narcotics; we have quite a bundle of that and our interest in this particular case is the fact that illegal trading in drugs, distribution and consumption are criminalized activities. And of course we know very well the correlation between drug consumption and crime, so we seized quite a bundle of Indian hemp yesterday; and as we speak, I have three suspects in my custody, they are undergoing interviews, interrogations. And of course, when we are done with that we are going to bring in NAFDAC and the NDLEA into that.

Where were they arrested?

They were arrested here in Calabar. We also have in custody a member of a gang, who specializes in stealing power transmission infrastructure. They went to bring down a suspended transformer, decapitated it, balkanised it and removed vital components from it of course with the mindset to sell those things and make unnecessary economic gains. Of course the major problem here as I have seen is that people do not come to terms with the fact that security is the business of all and sundry and they tend to assume that security personnel are magicians who should do it all alone. Security personnel cannot be everywhere at the same time, we are dealing with over 200 million people in Nigeria, the number of personnel available may not be proportionate to the population and therefore, we enjoin members of the public to see to the fact that it is their responsibility to partner with the security agencies in the bid to safeguard our collective constitutional values, space and ensure that we enthrone peace, law and order.

Yes, so we heard that corpses were discovered there, but not as over blown in the media. Well we are yet to know how the corpses got there. This is still a mystery, but all the services are investigating as a joint platform and at the same time, investigations are ongoing, we want to unravel what actually happened, how they got there and establish the truth. We heard it as a rumour, but when we do what we are supposed to do, we will unravel what actually happened there and at that time we will have the basic facts so that we share information with members of the pubic at the appropriate time.

What is the state of the facilities you have on ground to fight crime?

For running enterprises like security agencies or any other concern for that matter, even if you are running a corporate institution, the matter of funding, budgeting are basic essentials. The Federal Government, of course, is doing its own bit and supporting; likewise the state government has also been supporting, but then, well-meaning Nigerians and corporate organisations are also enjoined to assist public institutions, particularly the security agencies; they can of course assist in ensuring that the environment enjoys high level of tranquillity where business can thrive and economic activities can be promoted. Normally an agency like the civil defence, army and so on are efficient and will be most effective if they are highly mobile. The security agencies should of course be very mobile and when you have to be mobile, you need vehicles. We have vehicles, we still need more and of course, well-meaning people can offer assistance, because the service we render firstly and foremost is to protect the constitution and by extension to protect the people. Sometimes we make request to the governor and then the government comes up, but you know it is a process, when you make a request it has to be processed, and it will take little time before finally those thigs are done.