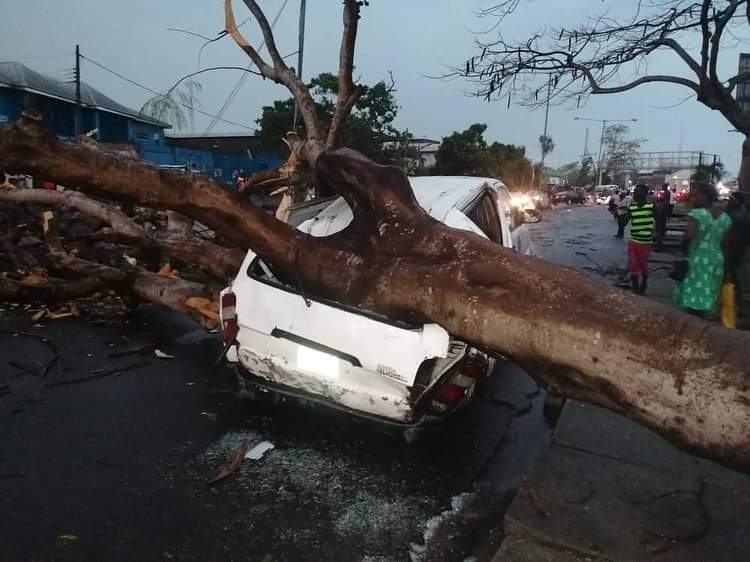 In the aftermath of about two hours of devastating windstorm that wrecked havoc in Calabar, the Cross River State capital metropolis on Thursday, leading to the bringing down of government trees and electrical installations, culminating in a halt of vehicular movement within the metropolis, the Cross River State Commissioner for the Environment, Mr. Mfon Bassey, and his team have began the desilting of drainages and cutting of trees to allow vehicular movement.

The commissioner, in company of the helmsman of Calabar Urban Development Authority, Mr. Joemary Ekeng, went round the state capital, cutting trees which halted vehicular movement in the state capital after the windstorm.

Speaking on the development, Mr Bassey described the windstorm as an unfortunate an unforseen calamity, which had inflicted pain on residents of the state, particularly those who lost property worth millions of naira to the windstorm.

The commissioner, who was yet to quantify the value of the damage done to the state capital by the unfortunate incident, urged residents of the state to exercise patience as the government was working tirelessly to ensure that all the blocked drainages, which are likely to cause flooding in the city of Calabar, when it rains again are being unblocked.

Averring that the timely intervention by the ministry was to ensure that the roads are for human nad vehicular traffic, so as not to cause a hitch in the economic activities of the people, which is hinged on movement of persons and vehicles in the metropolis, Bassey said, “You can see that we are working tirelessly to ensure that there is vehicular movement to avoid the truncate of the citizens’ businesses.”

The exercise saw the removal of huge tree that trapped a car at Etim Edem axis, around Mary Slessor Avenue among others.

The team, made up of men of Calabar Urban Development Authority, CUDA, headed by Mr. Ekeng, also visited Calabar road, where a signage hosting metal frame fell across the road leading to Watt markets.

As of the time of filing this report CompassNG learnt that the secretariat of the state Ministry of Environment and Ministry of Information also had a their share of the havoc wrecked by the windstorm.