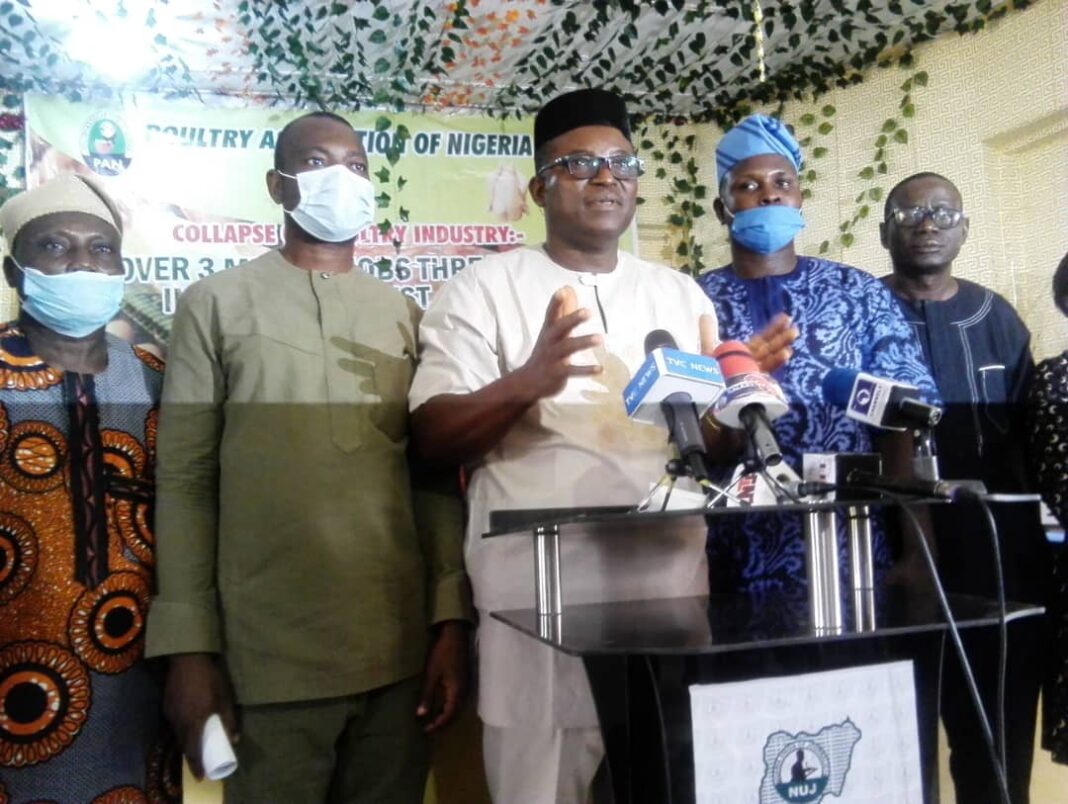 Poultry farmers under the auspices of Poultry Association of Nigeria, PAN, have warned that millions of jobs would be lost in the poultry farming sector, which employs over 10 million people, unless the government puts an immediate end to the current exportation of maize and soya beans.

Recall that in the past few months, poultry farmers in the country have witnessed severe scarcity of grains, including maize and soya beans, a situation which has caused the closure of some poultry farms and loss of jobs in the industry.

The General Secretary, Poultry Association of Nigeria, South West chapter, Dr. Olalekan Odunsi, who addressed journalists in Ibadan at a press conference, tagged, ‘Imminent Ccollapse of Poultry Industry,’ expressed grave fear of further loss of millions of jobs due to the unavailability of maize and soya beans .

Dr Odunsi siad that the exportation of maize and soya, even when local demand had not been met, contributed majorly to the sudden rise in the price of poultry feeds.

Insisting that the high cost of production of poultry products have led to the closure of business by many farmers, while prices of poultry products have also gone beyond the reach of many Nigerians; he said, “The poultry industry in the South West geo-political zone is over six decades, growing consistently and steadily to a population of 30 million, a number representing more than 60 per cent of the national poultry population. In investment, this sector is worth over N2 trillion naira. In job creation, it employs over 10 million people directly and indirectly.”

“However, if urgent attention is not given to the lingering crisis of grains, especially maize and soya, we fear that an industry with such an enviable statistics may suffer a total collapse.”

Odunsi explained further that after the prices of maize and soya rose from N105,000 per metric ton to N165,000 in July 2020, the Central Bank of Nigeria, CBN, announced a ban on foreign exchange for importation of the two grains in order to protect local growers.

According to him, the local growers cannot meet local demands because of shortfall in rain in 2020, insecurity, herdsmen/farmers crisis and illegal exportation of the items, leading to a huge shortfall in supply and hike in price.

“In December 2020, most farmers were unable to sell their broiler because the cost of production was even higher than what an average Nigerian could afford. Presently, egg is going out of the reach of an average family with ideal price at N1,300 per crate; but the farm gate price is still beteeen N1,000 to N1,100; a price that will force farmers to close down.”

While calling for emergency grants from government, he also appealed to President Muhammadu Buhari to approve urgent importation of animal feed grade of maize to sustain the over 50 million layers, 100 million broilers, one million breeders, and other classes of poultry until the next harvest season.

He added, “In the interim, government should enforce a ban on export of soya seed and its processed meal to save the current 10 million jobs in the poultry value chain of the Nigerian economy.”

Osun: With Oyetola, No One Is Left Behind