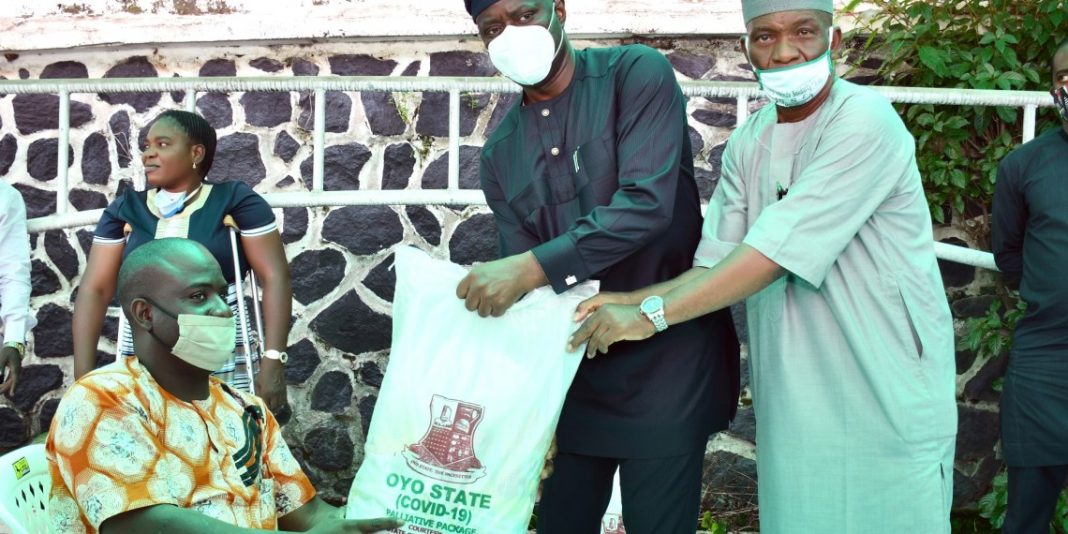 …Insists They Won’t Be Cheated

The governor of Oyo State, Engineer Seyi Makinde, on Wednesday reached out to Persons Living with Disabilities in the state through the distribution of palliatives, insisting that his administration will make sure they are not short-changed in the scheme of things.

Speaking at his office at the Secretariat, Agodi, Ibadan, the Oyo State capital, during the distribution of palliatives to the PWDs, Makinde maintained that pretenders and impersonators will never again be allowed to take what rightly belongs to PWDs in the state.

Adisa added that the state had distributed palliatives to 90,000 poorest of the poor households; just as it had also distributed seedlings, herbicides, pesticides and other farm inputs to 10,000 farmers in the first and second phases.

Makinde reiterated his promise to set up an agency for persons with disabilities, noting that his administration has not forgotten its commitment in that regard and promised that the agency will come on stream before the second anniversary of his administration in office.

He said, “When I walked in here this morning, I thought of the pictures in my archive. We have all met. We have all taken pictures together. So, you are not new to me and I am not new to you. It is just the continuation of the relationship that we started, even before I became the governor of this state.

“This is the third phase of palliatives distribution. The first stage is for the poorest of the poor amongst us. We distributed palliatives just like this to 90,000 households. Some who are farmers called me and said we should give them seedlings to increase their productivity when they get to their various farms. We listened to them and, in the second phase, we distributed seedlings to the farmers.

“Now, this is the third phase, which is for the vulnerable within us and it will be for 30,000 households. So, we are flagging it off with yourselves, because you are among the vulnerable in our society.”

Stating that he was not unaware that his promise to set up an agency for PWDs has not been fulfilled, Governor Makinde maintained that the promise will come to fruition, as he has kept a record of all the promises he made during the electioneering; even as he implored the PWDs to continue to adhere to the directives of the Oyo State Task Force on COVID-19.

Special Adviser to the governor on Agribusiness, Dr. Debo Akande, while speaking at the distribution, said the event was a reflection of Governor Makinde’s commitment to ensuring equity and equality in the running of the state.