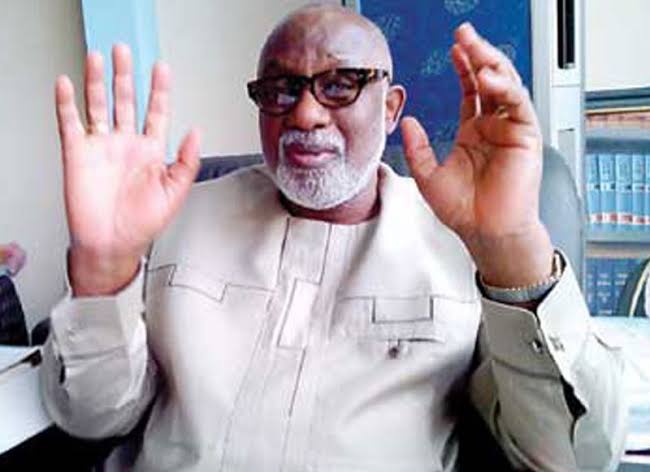 A few weeks ago, Ondo State was forced to take notice of the celebration of the third anniversary of Governor Rotimi Akeredolu’s administration as the executive governor of the Sunshine State.

Earlier before now, the people had carried on with their businesses with the firm belief that they are in the hands of an autopilot, who seldomly remind them of his existence via vituperative utterances.

Since 1999, Ondo State is one unique state that has had a fair share of virtually all political parties. From Alliance for Democracy, AD, in 1999 to the Peoples Democratic Party, PDP, in 2003 and Labour Party, LP, in 2007 and now the current ruling All Progressives Congress, APC, in 2016.

The uniqueness of Ondo State in the choice of political parties is worthy of investigation. The state electorate has chosen from a variety of political parties. We’ve tasted all that Nigerian political system can offer. We’ve had a bite of PDP, APC, AD and even had a taste of the third force in LP.

In all, it is safe to say that the state can effectively advise others on which party suits them better.

For three solid years, Ondo State has had a taste of the APC at the state level. Yes, it’s already three years ago that Governor Rotimi Akeredolu, SAN, took an oath office to defend, protect and govern the people of the Sunshine State.

Let’s take a look at the performance of the APC administration, compared to what we had in the past.

A chronicle of the Akeredolu administration has left a sour taste in our mouths, as it is laden with lies, hypocrisy, buffoonery, and uncouthness.

What started as a joke with the convocation of a doomed talk show, which was termed an education summit after the inauguration of this administration suddenly ended up being a well-executed plan to drastically inflate the tuition of the state-owned tertiary institutions by over 500 per cent.

The summit also recommended the transfer of missionary schools back to missions and scrapping of mega schools to pave way for refurbished primary and secondary schools across the state.

The summit even advised the government to recruit teachers to meet up with the UNESCO standard of a teacher per 20 students. But aside from the hasty implementation of the tuition increment, none other recommendations of the summit have been implemented to date.

The governor’s statement when the increment issue was at its peak that “education is not for the poor and students can’t continue to pay tuitions that is not enough to buy a pair of shoes,” was a direct opposite of what he said before the election in 2016. It is on record that Governor Akeredolu promised to sustain the N25,000 tuition bequeathed to him by his predecessor.

This has consequently increased the high rate of criminality and prostitution in the host communities. Students of tertiary institutions in Ondo State now possess a preoccupied mindset on their tuition which is now hindering their concentration level, thereby affecting their academic performances.

The governor even asked the people to buy forms with the promise that they would be recruited to teach in our primary schools. But to date, no recruitment has taken place in Ondo State.

Akeredolu has prioritized urban health care. With this, over 80 per cent of Ondo State indigenes do not have direct access to health care. With the obvious degradation of the Mother and Child Hospitals scheme, the maternal mortality rate has skyrocketed to an unprecedented high level in the state.

Since November last year, Ondo State Water Corporation stopped dispensing water to homes. A few weeks ago, the governor launched a new water scheme with the aim of fattening the internally generated revenue of the state to the detriment of indigent members of the society.

One would ask, what will this government give to its citizens free of charge?

But gory as it seems, there exist some reasons to be joyous about this government. The chief of it is the drive by the governor to get marijuana legalized for commercial and medicinal production. As he has rightly argued, when he met President Muhammadu Buhari, Ogbese Weed is the best medically endowed leaf in Ondo State and beyond which must be turned into a source of revenue generation.

Nigerians pay lots to import CBD oil, made from marijuana to treat cancer. We can get it manufactured quite cheaply here under the watchful gaze of drug law enforcement officials just like the government is planning.

Considering all the above, I’m wondering what would be used by the Akeredolu’s government to campaign for a second term, if he eventually picks the ticket of his party in May this year.

•Àjàyí writes in from Akure, the Ondo State capital.