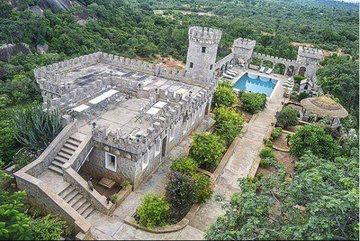 Christ Church Cathedral, Lagos
The Cathedral Church of Christ, Marina, Lagos, is an Anglican Cathedral on Lagos Island, Lagos. The foundation stone for the first cathedral building was laid on March 29, 1867 and the cathedral established in 1869.

Jaekel House, Lagos
Located inside the Ebute-Meta premises of the Nigerian Railway Corporation, Jaekel House is a restored colonial mansion. It now serves as a railway museum and photo gallery of the NRC’s colonial era.

Lagos Colonial Secretariat
The old secretariat, built in English architectural style, along with two twin-tower, which serves as a guard front for security, was completed in 1895. It is by far, the most imposing colonial building in Lagos.

Holy Trinity Anglican Church, Ebute Ero
The Holy Trinity Church, Ebute Edo, Lagos Island is the oldest church in Lagos. The church was first established as a mission station on Sunday, January 10, 1852. It was built by the early Anglican missionaries and newly-converted locals.

Mapo Hall, Ibadan
Popular Mapo Hall in Ibadan, the Oyo State capital, may not look like it, but it is also one of the oldest buildings in Nigeria. Built in 1929, Mapo Hall has witnessed 91 years of Nigerian history from its vantage Mapo Hill summit, the highest point in the ancient city of Ibadan.

Kajuru Castle, Kaduna
While every other buildings on this list are very old, Kajuru Castle is not that old, since it was built by an unnamed German expatriate in 1978.

King’s College, Lagos
King’s College, built in 1909 at a cost of £10,001 by the British colonial administration in Lagos, remains one of the oldest buildings in Nigeria.

Lugard Hall, Kaduna
Lugard Hall, which hosts the Kaduna State House of Assembly, was built in 1914 and is 106 years old. It was named after the famed Lord Lugard and originally served as the legislative seat of the defunct Northern Protectorate.

Hope Waddell Training Institute, Calabar
Dating back to 1895, the institution was founded by missionaries of the United Presbyterian Church of Scotland and named after the Revd. Hope Masterton Waddell.

Centenary Hall, Abeokuta
The Egba Centenary Hall was built by the settles to monumentalise 100 years of peaceful existence at Abeokuta, after the intertribal wars and was constructed in 1950.