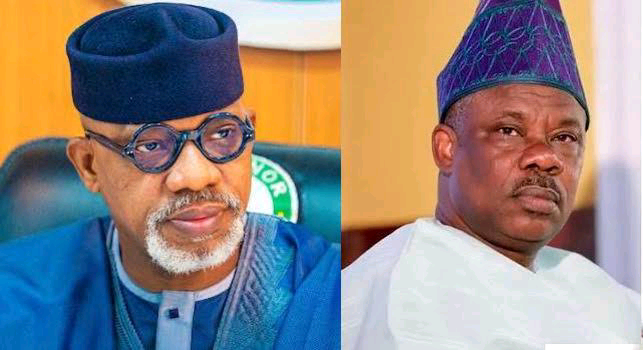 Many may wonder what has attracted a groundswell of goodwill, endorsements and accolades to Ogun State governor, Prince Dapo Abiodun, lately. He is lucky to have a good upbringing and a mien uncommon in the pantheon of successful politicians and businessmen.

There is no gainsaying that the gale of endorsements for his second term ambition by traditional rulers, professional bodies, market men and women, artisan, transporters, youths, elder statesmen and the business community, has more to do with aversion for the oppositional defiance disorder, ODD, inherent in his predecessor, Ibikunle Amosun, than anything else.

But the governor does not take the goodwill for granted. He has been a major promoter of accountable, open, just, fair, equitable, and inclusive governance, which he believes is fundamental to the building of our future together – an agenda that would equally engender economic growth of the state and individual prosperity of the citizens.

Nothing reveals this more tellingly than the decampment of Amosun’s core loyalists and switching of allegiance to the poster boy for the 21st century Ogun State.

Ahead of the 2023 general elections, the rank of the former loyalists of Senator Amosun, who are members of the All Progressives Congress, APC, and the ill-fated vehicle, Allied Progressives Movement, APM, used as vehicles to undermine the ruling party, are back in the mainstream APC led by Governor Abiodun.

Others are one-time party chairman in the state, Alhaji Tajudeen Lemboye and other chieftains like Chief Olu Odeyemi, Gbenga Adekanbi and Hon. Dotun Fasanya, among other influential leaders across the three senatorial districts.

Before then, Governor Abiodun had used emotional intelligence, couched in his inclusive approach to governance, to deplete opposition elements by getting to his side former governor, Otunba Gbenga Daniel, from the Peoples Democratic Party, PDP; won the heart of Prince Gboyega Nasir Isiaka, who ran on the ticket of the African Democratic Congress, ADC, against him in 2019 and a hoard of other influential political giants in the state, like the late Buruji Kashamu, who not only collapsed his dominant group in the PDP into the APC.

Most of the decampees love Abiodun’s approach of spreading projects to all sections of the state at the expense of no other, in contrast to his predecessor’s style. Abiodun’s even-handedness in various projects seems to have eclipsed whatever differences they had against his emergence as governor.

Not sensing that he was swimming against the tide, former governor, Amosun while speaking after receiving an award from Abeokuta Club to commemorate the 50th anniversary of the club, said that the 2019 governorship election in the state was rigged to favour the incumbent, calling on his supporters – who are already on the other side – to be on the lookout for the next line of action.

Passing a ‘fatwa’ on his successor’ second term bid, Amosun said, “You know clearly my stand on this matter, just wait very soon, you will hear from us, my stand is where I stand, I am not in support of this administration, he must be removed.”

Many found this apostasy distasteful. They recalled Governor Abiodun’s style of governance and how he has related with the leaders of the party and acquitted himself creditably as an administrator.

One rhetorically asked: “How did we miss Governor Dapo Abiodun’s emotional intelligence?”

He cited the event, penultimate month, at the Presidential Lodge in Abeokuta, Ogun State, where the National Leader and the presidential flag bearer of the APC, Asiwaju Bola Ahmed Tinubu, referred to Goveenor Abiodun as “Eleyi” (this one)!

While President Buhari was not physically present and also might require the help of a translator to make sense of what Asiwaju Tinubu said on that day, Governor Abiodun was right at the event and understands Yoruba very well – the language through which Asiwaju made those comments.

The comments even managed to get a reaction from the Presidency and the APC leadership; to demonstrate how weighty they are.

“But the response of Governor Abiodun, was cool, calm and calculated. His (Abiodun’s) emotional intelligence practically saved the day.

“Amosun would never take it. He would have unleashed mayhem like he did in February 2019, when his boys pelted party apparatchiks, including sitting President Buhari with sachet water, not to talk of a would-be President,” the party man enthused

For the reflective politicians, while Asiwaju’s riposte can be explained away on the ground of being an elder and avuncular godfather and benefactor to the governor, what transpired at the Abeokuta Club and beyond with mobilization of sinister groups to oust the governor – fair or foul – would have set the state on fire, if the shoe had been in the other foot. It is the worst form of presumptuous rudeness, infra dignitatem and anti-partyism, they surmised.

It should be noted that Abiodun’s graceful node of emotional intelligence contrasts Amosun’s oppositional defiance disorder, ODD. For the uninitiated, ODD is generally associated with children. Patients afflicted by it exhibit signs and characteristics of belligerence, manifesting in hostile behavior to elders and antagonistic reactions to authority figures.

Like an ODD patient, Abiodun’s predecessor has, in an attempt to control, engaged in negative mannerisms: defiant, disrespectful and conducted himself in acts designed to make the authority figure lose his temper.

With emotional intelligence, Abiodun has through a well-thought out action plan and careful monitoring, clipped the senator’s wings. The key element employed is not to get caught up in playing the person’s game, because with their rules it was meant to make him act equally rascally and irritably. Like a trained psychotherapist, Abiodun takes control of the situation and make the delinquent adult accountable for his shenanigans.

Any keen observer or dye-in-the wool pundit and realist would have seen how his successor, Governor Abiodun is holding his own against the apparently irritable behavior of the outgoing senator, dancing his last political dance in the market place, after failing in 2019.

As prescribed by doctors, dealing with an ODD requires making a list of specific instances where the adult exhibited oppositional defiance. An adult with oppositional defiance needs concrete examples of inappropriate behaviour rather than a general observation that can be dismissed.

Amosun’s cup has overflown. The records are there. Instances abound of Amosun trespassing into the home of the leader of the party in the state, Chief Olusegun Osoba, with drone, undermining him and keeping his former friend and predecessor, Otunba Gbenga Daniel in limbo for the eight years he held sway as the Gateway’s Number One Citizen.

The Omoluabi disposition and performance, however, set Abiodun apart from his predecessor. Across the state and different groups: professional class, youths, market women and men, elder statesmen and women, traditional rulers and workers, the gale of endorsement has been exciting. They all premised their endorsement on Dapo Abiodun’s people-oriented and inclusive leadership, love for the citizens, altruism and performance.

Indeed, Abiodun won the hearts of the people with his practise of politics without bitterness and by bringing down political tension and heat in Ogun State. He also located and spread projects across the three senatorial districts, unlike the lopsidedness of the immediate past.

At the height of Amosun’s open hosititilty, Abeokuta became a no-go area for his living predecessors. His shenanigans gave rise to Egbe Matagba mole (society that frowns at disrespect for elders) and ouster of the Akinrogun Egba, who unleashed the accountant as the candidate of APC on the party in 2011.

Long story short, 2019 was Amosun’s albatross, as he was shamelessly suspended by the party for working against its interest and the Ogun electorate resoundingly rejected his nominee, who ran on the ticket of the Allied Peoples Movement, APM.

Like the chameleon that would keep changing its colours, 2023 has come and the exuberance remains unabated in the man who could not decipher that who the gods will kill, they first make mad.

Interestingly, sometimes it’s difficult to recognize the difference between a strong-willed or emotional child and one with oppositional defiant disorder. It’s normal to exhibit oppositional behaviour, but with proper grooming and psychological maturity, the symptoms can wane. Not for Amsoun.

Conversely, even in the face of provocation, Governor Abiodun’s ability to perceive, use, understand, manage and handle emotions is commendable. People with high emotional intelligence can recognise their own emotions and those of others, use emotional information to guide thinking and behavior, discern between different feelings and label them appropriately, and adjust emotions to adapt to environments.

Emotional intelligence is a core leadership quality and Prince Abiodun’s display of it throughout this season of pre-election madness tells a lot about his character and substance.

The last time a similar quality was displayed was during the 2015 presidential election, when then chairman of the Independent National Electoral Commission, INEC, Attahiru Jega handled Peter Godsday Orubebe’s outburst at the INEC headquarters with such calmness that it earned him national and international commendation.

In the case of Prince Abiodun, those who know him very well would attest to the fact that, either as a leader or as an individual, emotional intelligence has never been in short supply in his dealings with people.

The governor will never deny the good people do to him. As attested to by many when they reeled out their endorsement criteria, he remains grateful to people whose contributions have taken him thus far in life and believes that mentorship often succeeds where ‘godfatherism’ fails.

Abiodun has mentioned many times that the position of governor he holds is in trust for the people of Ogun State and that his social contract with the people is to be fair, just and equitable. He owes God, the good people of Ogun and himself the fulfillment of that solemn agreement.

Since power in a democracy belongs ultimately to the people through the ballot, Abiodun’s hope for a renewal of his mandate come 2023 – and the hope for a much better delivery of dividends of democracy – is rooted in his faith in God, the support of the people of Ogun and the numerous achievements his administration has recorded since he was first entrusted with the mandate in 2019.

Prince Dapo Abiodun’s investment, development and empowerment priorities, strategically embedded in his administration’s ISEYA mantra, have endeared him to the hearts of both critical stakeholders and ordinary people alike.

Apart from being Yoruba for ‘Time to roll up the sleeves,’ ISEYA is also Abiodun’s acronym for his administration’s developmental blueprint, which is: I – Infrastructure; S – Social Development and Wellbeing; E – Education; Y – Youth Development, and; A – Agriculture and Food Security.

His a vision to give Ogun State focused and qualitative governance and to create the enabling environment for a public private sector partnership, which is fundamental to the creation of an enduring economic development and individual prosperity of the people of Ogun, has transformed the state within three years.

Not taking the decampees for granted, Governor Abiodun reminisced, during one of the harvest of returnee party stalwarts, “You have got it right by taking this bold step in the sense that one cannot say because of sympathy you continue to stay with somebody and become useless. You should know what you want, where to get it and how to get it.

“I am one governor who is passionate about inclusiveness, just and fair. You can see that even if you join the party today, I take and recognize you as people who had been with the party from the inception. Politics is parochial; it is how to better your life and that of others. You cannot do politics with emotions. I want to welcome you back to the larger family and since you are not strangers, you will be promptly integrated.”