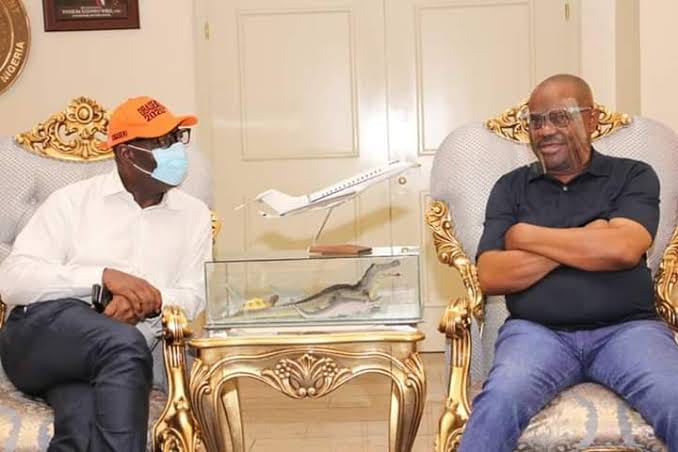 One of my favourite Yoruba proverbs says, “Ti wahala ba de ba ologbon, awon omugo ni won a ma se oludamoran e.” Literally, what that means is that, “When the wise is confounded, the admonition of the foolish comes handy.”

The news of Edo State Governor Godwin Obaseki’s resignation from the APC certainly did not come as a surprise to practically everyone. Events leading to it didn’t say otherwise. It also goes without saying that his meeting with President Muhammadu Buhari (if it ever held) before the announcement was just a waste of time. He couldn’t have expected a miracle, not even at this time.

If those are settled, then, let’s talk about the emerging optics. There’s no debating the fact that the optics are looking good for now. Although Obaseki hasn’t publicly spoken about which party he’s heading to, his moves in the last 24 hours have already hinted at the Peoples Democratic Party, PDP.

Therefore, for the PDP, one of the most delightful optics is that the entire South-South would now be under its watch. A round of applause, please! At least, that would go on for the next three months before the election in September. So, either by hook or crook, that’s a feat that came without any electoral gun battle.

So, let’s start with some of the issues one by one. Obaseki resigned from the All Progressives Congress, APC, because he wanted to fight injustice in the party, right? But what is he going to perpetrate in the PDP, where he is going to be handed the ticket – just like that – justice? After some people had laboured hard to get to this point, including the fact that some of the rules would surely be bent for him. Is that really justice?

But if you agree they are both six and half a dozen, then, it confirms one of the thrusts in my last piece that the foundation of politics was laid with injustice. To that extent, let’s blame no one, but contend that they are both giving to the game what it requires to survive, isn’t it? Good! So, no more moral slant to this battle.

Now, in pondering his options, are the APC lawmakers in the state Assembly going with him? If not, what are the problems they could portend for him, just in case the party decides to pull its weight, at least, Obaseki no longer have that extended party control over them.

How about his commissioners, a majority of whom secured their appointments as party members, are they also going with him to the PDP? Is their future secured with a man, whose political base is near zero, apart from being governor, either in the APC or the PDP?

He used to have a faction of the APC in the state loyal to him. Is that faction transmuting too; or it is staying back to play the spoiler or return its loyalty to the original owners?

It’s evident that, the pace at which the governor made some decisions created some palpable loopholes to suggest he might not have thoroughly pondered his options.

Again, let’s take a fleeting look at some of the closest cases in time to be sure of what lays-in-wait. In Zamfara and Bayelsa states, where the opposition reaped from APC’s poor choices, elections had actually held and won by the ruling party before the courts upturned them. Remember?

In Rivers, the APC was not even on the ballot and so, there’s no debating where it stood in the equation. In Imo, where the party came fourth, a court ‘of competent jurisdiction’ gave it back to the party. What this means is that by whatever means possible, the Edo election is for the APC to lose.

It’s a no-brainer, more so, if Obaseki understands the science of elections generally. The governor, in my reckoning, stands no chance whatsoever, especially, that he is running on the platform of an opposition party. APC would muscle him mercilessly to the last.

Talking about the certificate matter, Obaseki’s O/Level results showed that he had three credits and spent only three years to bag a Bachelor of Arts degree in Classical Studies from the University of Ibadan, Oyo State, in 1976, without an A/Level result.

Thus, the inference here is that Obaseki allegedly submitted a false affidavit to the Independent National Electoral Commission, INEC, on July 12, 2016, contrary to the provisions of Section (5) and (6) of the Electoral Act.

Interestingly, the same PDP he’s now gone to for help, was the first to suspect that the affidavit was false and got its lawyers to write the Federal High Court, Abuja, requesting for a certified true copy of the affidavit on September 2, 2016.

In response to PDP, the petitioners said the Abuja High Court denied issuing any affidavit to the governor. Yet, Obaseki didn’t appeal and now back with the PDP, the same party that brought this all up in the first place. Interesting times!

I have no doubt in my mind that the PDP has already handed Obaseki the governorship ticket, damning the grieving others, who had dreamt of flying the party’s flag, even if they did not win. Well, it is yet to be seen how correcting an alleged wrong with another wrong would yield justice and victory in this case.

Above all, I believe, from my personal findings that the governor does not boast the kind of popularity he’s been trying hard to sell to the undiscerning; the reason I thought crossing to the major opposition party was poorly conceived. Staying back to fight this, I would have thought, was his best bet to get a semblance of justice.

Otherwise, who is that notable and noted person in the state that is with him in this battle? It’s not just enough to be the governor. It’s a lot more than that. I’m of the view that he is a floating loner and would soon realise this.

If it’s also true that the favoured choice by the APC, Pastor Osagie Ize-Iyamu, still has PDP loyalists, many of who would rather run with him, especially, in view of the injustice that is about to be dished out to other contenders in the PDP, then, I insist it’s game over.

Whichever way, my projection is simple and remains the same: this battle is already lost and won. If Obaseki could cast his mind back and recall how people and institutions were muscled to make him governor, then, he should be ready to have a taste of the abuse of raw power.

However, to build safety into these assumptions, it would be mesmerizing to see the predictions go south. Such an experience would naturally be helpful in political science classes. After all, the President Donald Trump election made bookmakers look stupid.

*Olaleye, a journalist writes from Lagos.