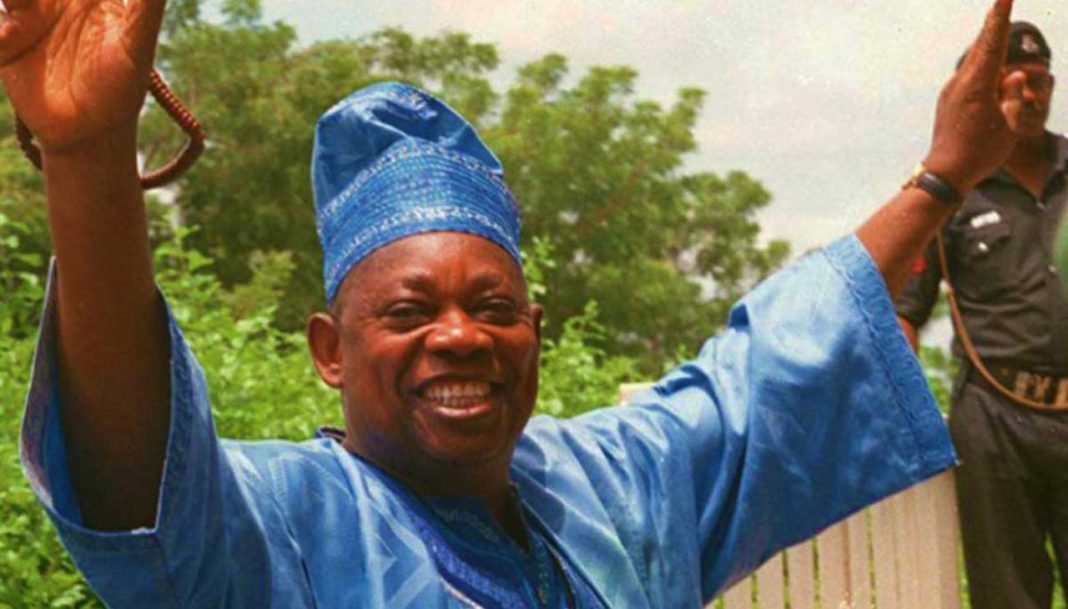 Like a skeleton, another June 12 creeps up on us. This year’s anniversary is at the King’s Court located on A-Sore-Rock. Twenty-seven-year memories of missed opportunities and unlearnt lessons flood back: Torn drums. Cracked voices. Stopped music. Yet, today’s anniversary dancers wriggle on in wild gyration. The drummers, with bulging biceps and sweaty bodies, bang crazily on the drumless drums. The same leaders of yore chant a broken melody akin to the sound of a plodding elephant farting through a wetland. Shocked, the audience can’t believe their ears nor trust their sight. Something is recklessly amiss. This scenario isn’t what they bargained for.

This isn’t the picture of Nigeria that was promised and shown to them five years ago. The drums are torn. The voices are cracked. The music has stopped. Yet, the King and his court of jesters dance on, unmindful of the ‘ah!’ that flung open the jaws of the audience. Yet, the King and his court happily chant a dirge to a perplexed audience on June 12.

Again, it’s June 12, a once-in-a-year period when Nigeria remembers the symbol of her modern democracy, Chief MKO Abiola, whose presidential victory was annulled by his true friend, General Ibrahim Babangida, in 1993.

June 12 has become an annual ritual to luxuriate in bombast and utter hot air. On this June 12, the Katsinner King beats his chest, listing his achievements and claiming responsibility for the taste of water, the color of air, the roar of the ocean, the teeth of the fowl, the eyelids of the snake and the fecal matter that squeezes through the anus!

Wailers should shut up! Nothing can be done to stop the killings and kidnappings in Borno, Katsina, Benue, Yobe, Adamawa, Gombe, Kano, Kaduna and all across the land. The Nigerian military is ever efficient; it murders!

An ex-Lagos State Commissioner of Police, Abubakar Tsav, died last week. Before he died, Tsav, who investigated the gruesome murder of Dele Giwa, was convinced that the Nigerian military killed the fearsome journalist and protected his killers from prosecution. Some of those fingered by Tsav in parceling Giwa to the great beyond via a letter bomb in 1986 are still alive. But some are vegetating on the top of a hill.

The Nigerian military fiercely protects murderers. Like in the case of Giwa, the Nigerian military also effectively protected the Taraba kidnap kingpin, Bala Hamisu aka Wadume, from being taken to justice by some dedicated policemen. Three of the policemen who were transporting Wadume to justice and two civilians were murdered in cold blood by Nigerian soldiers on Tuesday, August 6, 2019. Five other policemen sustained life-threatening injuries in the soldiers’ attack. And the killing wasn’t wrong in the eyes of the President, Major General Muhammadu Buhari (retd.), whose Attorney General and Minister of Justice, Abubukar Malami, has removed the names of the killer-soldiers from the prosecution list. When soldiers kill patriotic policemen and innocent civilians with bullets brought by taxpayers’ money, the killer-soldiers only need to chant ‘esprit de corps’ to the retired General and the prison gates will be flung open for the killer-soldiers to march to freedom in starched khaki.

Disgusting events occur in Nigeria as naturally as leaves come to trees and fish come to water. I salute my fatherland, Nigeria, the wanton field where the President and his wife, Aisha, seldom wake up from different sides of the bed to wash their domestic linens in public. I remember the many domestic battles of Aisha but I won’t dwell on them. I remember that on a state visit to Germany in 2016, Buhari, who was in the presence of German Chancellor, Angela Merkel, publicly consigned Aisha to the kitchen, the living room and the ‘Other Room.’ I also remember Aisha’s battle to reclaim her domestic space from stifling and overpowering relatives.

On this year’s June 12 anniversary, I won’t criticise the President for three reasons. One, nothing has really changed for the better in Nigeria in the last five years despite critical appraisals of his administration by the media. Two, the President appears unperturbed with the deaths and agony wasting the land. Three, I’ll overlook Buhari’s perennial incompetence on this historic occasion because the event should be a celebration of Abiola’s courage, passion and vision.

So, in honour of the late Aare Ona Kakanfo, I’ll comment on one of his pastimes. Music.

It’s an open secret that the young MKO earned a living as the lead singer of his musical band which played at private and public functions. He later won a scholarship and went to the University of Glasgow, Scotland, to study. He got his breakthrough when he joined the International Telephones and Telecommunications (ITT Nigeria) in 1968, rising to the post of Chairman/Chief Executive by 1971. Abiola’s philanthropy was matchless so were his tastes for arts, sartorial elegance and the good life. At a period, MKO was the most sung about Nigerian. And he was a patron of the two foremost Juju music icons, Chief Commander Ebenezer Obey and King Sunny Ade, who both waxed many songs in his praise.

As I write this article, I’ve listened to King Sunny Ade’s, “E su biri biri ke bomi,” and Obey’s, “The man, the son and the donkey,” a couple of times. In “E su biri biri,” Sunny examines the abiding complexities of life while Obey, in ‘Ketekete’, bemoans Man’s insatiability. Both Obey and Sunny engaged in the longest music rivalry in Nigeria’s history, spanning over 40 years without engaging in nasty name-calling as obtained between the late Fuji moderniser, Chief Sikiru Ayinde Barrister and General Kollington Ayinla, the inimitable Bata Fuji creator.

Obey, the grandmaster of Juju Miliki has left his art to become a fisher of men for Jesus Christ. Sunny, the extraordinary King of African Beats, and a two-time Grammy Award nominee, is getting old. Sadly, both Juju godfathers have no godsons to step into their shoes and carry on the torch. Between 1989 and the early 90s, multi-instrumentalist Sir Sina Peters had the Juju throne in sight when he released four successive monster hits, Afro Juju, Shinamania, Dancing Time and Experience, but his genius wasn’t enough to earn him the crown.

It isn’t uncommon for a music genre to die off. Apala, a genre of Yoruba music, was once more popular than Fuji. Today, Apala is in the Intensive Care Unit. Awurebe, another form of music popularised by the late Epo Akara, is dead. Waka music, made popular by Batili Alake and Salawa Abeni, is on life support.  In an interview by Oyinmomo TV, Shina Peters confirmed that Fuji music was a major threat to Juju music. He said the monumental success of Fuji Garbage by Barrister inspired Afro Juju. He also recalled an episode during a show at the Tafawa Balewa Square in Lagos, where fans migrated from the stage of KSA to Barrister’s, saying this forced him to understudy Barrister and discover the secret of ‘omele’ drum as a crowd puller. Much later, Barrister’s acceptability also dwindled among music fans, who preferred noise, nonsense and percussion to philosophical lyrics, hence Barusati expressed his readiness to sing ‘saje’.

Ironically, Barrister’s successor, King Wasiu Ayinde, in an interview with Teju Baby Face, described KSA as his role model, saying as a lover of good music, he was wowed by KSA’s music and swagger. In their peaks, Wasiu was the crown prince to Barrister and Kollington. Wasiu is the linchpin that Juju doesn’t have. Luckily for Fuji, Wasiu has likely successors in Wasiu Alabi Pasuma, Osupa Saheed and Abass Obesere.

Why is there no successor in sight for Juju music? Is it because it’s a much more difficult genre than Fuji, which doesn’t adhere strictly to musical notes? June 12 and Abiola were killed. Will Juju outlive Sunny and Obey or not?

*Odesola writes from the United States and can be reached at tundeodes2003@yahoo.com

2023: Let’s Go For Election Instead Of Revolution -Bishop Isong