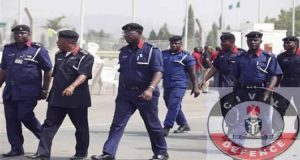 Benjamin Awua, Jalingo
The Taraba State Commandant of the Nigeria Security and Civil Defense Corps, NSCDC, Alhaji Aliyu Ndanusa, on Friday, January 31, promised to provide adequate security to Taraba rice farmers, in line with the command’s Agro Rangers Initiative to enable them achieve food sufficiency.
Ndanusa gave the assurance when he paid an unscheduled visit to the rice pyramid, which the agro rangers are currently providing security for in Jalingo.
Expressing delight at the volume of paddy rice at the store, the commandant, assured the farmers that the agro rangers would continue to provide security for them in order to meet the Federal Government’s target for self sufficiency in rice production.
He said, “I am here to see the result of the deployment of the agro rangers to maintain peace between farmers and herdsmen.
“Agro rangers is an initiative of the Federal Government to ensure peace between grazers and farmers to guarantee food security.”
In his remarks, the chairman of the Taraba State Rice Farmers’ Association, RIFAN, Mr. Tanko Andamin, said the association was very pleased with the operations of the agro rangers in ensuring the safety of rice farms and storage centres.
He recalled how farmers were being killed or kidnapped on their farms before the intervention of the agro rangers.
Explaining that 16,000 rice farmers across the state were already recognized by the Central Bank of Nigeria, CBN, assisted programme on rice production, Andamin said, “About 52, 000 additional  rice farmers were in the process of completing their registration for recognition and the target is to register 100,000 farmers in the state to be able to showcase the real potential of Taraba in rice production.”
He, however, said the late season flooding that affected the state had a negative effect on many rice farmers, especially along River Benue, adding that this is even as farmers were currently undertaking dry season rice farming with the hope of bumper harvest.