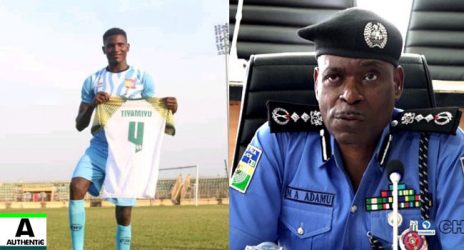 The NFF, in a letter signed its General Secretary, Dr. Mohammed Sanusi, sent to the chairman of Ogun State Football Association and the NFF Executive Committee members, bemoaned the death  of the NPFL player, noting that his death was untimely.

The NFF said, “We are particularly sad about the reported circumstances of the player’s death, as attested to by a team mate, who was with him at the time, to the effect that he was arrested by officers of the Special Anti-Robbery Squad, SARS, on the claim of wearing military apparel, and was pushed down from a moving vehicle before being crushed by another vehicle.

“To the entire family of Ogun State Football Association, we pray that God will grant you the fortitude to bear this loss of a promising talent who could have developed to a national and international star, giving his humility, hard work, discipline and professionalism as attested to by his team mates.

“To the immediate family, extended family and friends of the departed player, we pray for God’s love and support for them to be able to bear this great loss, while also praying that God will grant the departed Tiamiyu Kazeem eternal rest.”