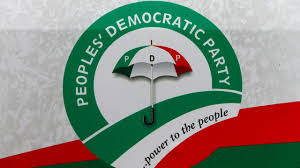 The Oyo State chapter of the Peoples Democratic Party, PDP, has described as needless and unwarranted the attacks and campaign of calumny against the state governor, Engineer Seyi Makinde, over a statement he made at a recent business/investment forum in the United States of America, USA.

The state chapter of the All Progressives Congress, APC, and some attention-seeking politicians, in various statements had attempted to misrepresent the governor’s utterance that the state has a workforce of 115,000 and pays a monthly wage of N11 billion.

In a statement signed by its Publicity Secretary, Engineer Akeem Olatunji, the Oyo PDP noted that those behind the attacks are uninformed, mischievous and devious.

Stating that the opposition APC and some political minions, including one Mr. Hakeem Alao, who is claiming to be the governorship candidate of the Alliance for Democracy, AD, in the last election, are confused and needed to be educated about running a state, the PDP said that Governor Makinde spoke at the Nigerian-American Business Forum in the USA as the father of the entire Oyo State and not just governor of the second tier of government, noting that merging the entire workforce and amount paid in wages by the state and local governments in Oyo State to convince investors was not out of order.

The party noted that the figure put out by Governor Makinde was a combination of state and local government workers and that the implementation of the minimum wage and incremental adjustment took the wage bill of workers in both tiers of government from N8 billion monthly to N11 billion.

It will be recalled that Governor Makinde had, at different fora, before the implementation of the minimum wage, noted that about N8 billion is pumped into the economy of the state monthly.

The PDP said it took exception to the campaign of calumny and unsubstantiated claim that the figure quoted by Governor Makinde was fake and an attempt to loot the resources of the state, warning the Oyo APC to desist from making reckless claims about Makinde, “who has proven through his policies and actions that integrity is non-negotiable and rekindled the hope of Nigerians that public accountability and transparency could be practised in governance.”

According to the PDP, the APC made the claim because it knew that with the ongoing biometric verification of the workers in the state, the immediate past government overseen by its leader would soon be exposed on how the wage bill of the state increased by over N1 billion after the APC lost the 2019 governorship election.

It added that the erstwhile ruling party is afraid of its shadows and thinks everyone would be like its leaders, who made a mess of governance and stole the state blind when given the opportunity to govern it.

“We read with bewilderment the statement credited to the crisis-ridden All Progressives Congress (APC) in Oyo State in which it criticised Governor Seyi Makinde, following his well-articulated and widely-commended investment pitch during the recently concluded Nigerian-American Business Forum held at Florida, United States.

“In their usual frustrated nature, the APC tried to cast aspersion on another wonderful initiative of the Makinde administration: selling Oyo State to the world with a view to attracting investments and expanding its economy. By leaving the meat of Makinde’s strategic proposal to investors to embrace Oyo State and the uncommon passion with which he advertised Oyo to hundreds of investors, to dwell on the figure of the Oyo State workforce and the wage bill, the APC showed itself as wicked and unconcerned about the prosperity of the state.

“In the statement, the APC or perhaps its attention-seeking publicity handlers, made unjustifiable claim that the 115,000 workforce and N11 billion wage figure quoted by the governor was fake and an attempt to loot. It went into a rigmarole of the alleged figures of each segment of the workforce at the state and local government levels, claiming that workers at the local government councils were paid directly from the federation account.

“One wonders whether the crisis of confidence rocking the APC has rendered everyone in it incapable of thinking straight. If not, the writers of that statement would have been able to see that the total tally of the figures they pushed out was even more than the 115,000 quoted by Governor Makinde. We also know that reasonable people will see that it is no-brainer that the figure and wage bill quoted by the governor was the overall workforce in Oyo State, a position, which the governor made clear in his statement.

“We have seen the deficit in the education of the APC members and we are ready to offer pro bono services in teaching them the art of governance and running a state. One, Governor Makinde committed no blunder by saying that the workforce of Oyo State is 115,000; he did not say that was the figure of the workforce of the Oyo State government.

“It is also important to point out the callousness of the APC to residents of Oyo State and make them see reason why they should never allow the affliction, which the APC represents, to rise again in Oyo State. The APC ridiculously quoted that the wage bill of Oyo State was N5.2 billion as of May 2019. Residents of the state should ask them where they were when the Makinde administration began the implementation of the N30,000 minimum and incremental adjustments in a state where the immediate past APC government was only paying a little above N13,000 as minimum wage?”

The PDP warned the deposed APC to bury its face in shame and face its crisis of confidence rather than attacking Makinde with the aim of distracting him, noting that with the unprecedented way investors had begun to show interests in Oyo State, the governor’s initiative to market the state has begun to yield fruit and the needless noise of the APC would not drown that achievement.