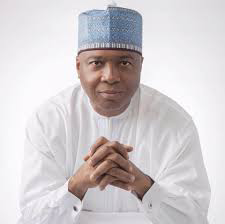 The recent approval of direct primary elections by the National Assembly for political parties to pick their candidates is the best if properly executed, says the President of the 8th Senate, Bukola Saraki.

He however insisted that Nigerians are not prepared for it, simply because accordi g to Saraki, a lot of work still needs to be done on it.

Saraki said this while speaking with journalists in Ilorin, the Kwara State capital, adding that the debate on the propriety or otherwise generated by the passage of direct primary for political parties must not however be allowed to scuttle the expected applications of the electoral bill.

He was fielding questions from newsmen at the weekend at the 9th memoral prayers for his late father, Dr Olusola Saraki, which held at their family house, along Ilofa Road, GRA, Ilorin.

The former governor of Kwara State added that the important thing to be done however, is for President Muhammadu Buhari to assent to the electoral bill in the interests of the political parties in particular, and Nigerians in general.

Saraki said, “Direct primaries is best for political parties if properly done. But I am sure Nigerians are not prepared for it, because there is still a lot of work to be done.

“But now, the National Assembly has passed it, we should make the best out of the situation, rather than allowing the controversy over just one item throw away the other good parts of the bill. What is important, is for the President to assent to it and enable Nigerians benefit from the other parts.”

Speaking on the outing of the Peoples Democratic Party, PDP, at the just concluded governorship election in Anambra State, where the party came second, Saraki remarked that the exercise was no doubt a success for Nigeria and its democracy.

He said, “The Anambra election was a success story for Nigeria, becuase many of us were sceptical that it would hold. But it did not only hold, it was peaceful and credible and we commend the Independent National Electoral Commission, INEC, for bringing in the technology that we had all along advocated for, to improve our electoral process.

“Yes, there is still some works that needed to be done no doubt, but we can improve on that for the next election to make it better. People can now say we are having elections that is closer to the best practices. That election was a good day for democracy and Nigeria and we thank the security agencies also.”

He said that PDP had demonstrated the capacity and leadership qualities to deliver the country with the way it’s leaders reconciled themselves to hold the National Convention, noting that what was important now is Project Nigeria and not the personal ambitions of anybody.

He asserted, “The party that cannot manage itself cannot rule the country.”

Paying glowing tributes to his late father, Saraki described the elder Saraki as a selfless leader, whose traits and values Nigerians of today should imbibe in the light of the present sorry situation of the nation.

Also in attendance were, former Minister of Transportation, Rt. Hon Bio Ibrahim, former Speaker of the Kwara State House of Assembly, Dr Ali Ahmad and the National Legal Adviser of the PDP, Kamaldeen Ajibade, SAN, among others.

Dan Borno, who preached at the event, described late Saraki as a star who made everybody his beneficiaries, even as he implored people in government to emulate the attributes of the late Kwara political icon.