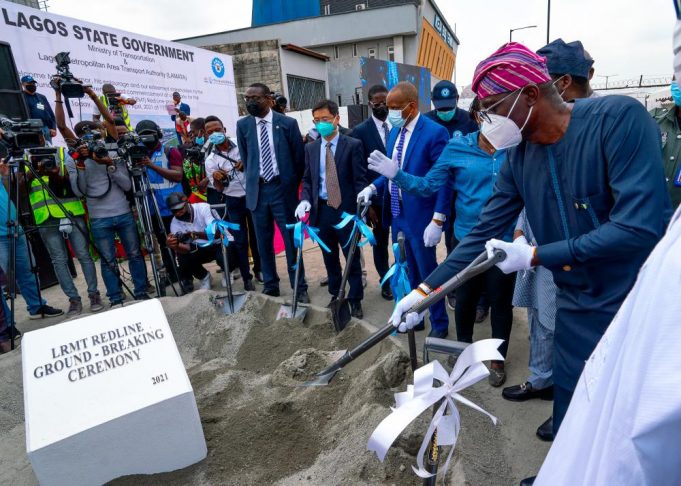 Lagos State Governor Bababjide Sanwo-Olu on Thursday began payment of compensation for the 2,341 tenants/ businesses, who will be affected by the construction of the Lagos Red Line Rail Project.

At the ground breaking ceremony done at Ikeja for the first phase of the Lagos – Red Line Rail project, which is a replica of the effort of the late former first governor of the state, Alhaji Lateef Jakande, who planned to construct a metro line 35 years ago, Sanwo-Olu said the funding for the Red line project is available and should be ready for use in the last quarter of 2022.

He said, “The Red Line is a 37-kilometre rail road, with 12 proposed stations. The first phase will cover Oyingbo to Agbado, with nine stations. Three of the stations will be constructed with the Lagos – Ibadan Railway Modernisation Projects by the Federal Government at Agbado, Agege and Ebute Metta Junction. The remaining six would be constructed as independent stations at Iju, Ikeja, Oshodi, Mushin, Yaba and Oyingbo. The phase two which would be mostly elevated would have stations at Iddo and Ebute-Ero, before terminating at Marina, where a huge interchange is planned to manage commuters on the Red, Green and Blue Rail lines, BRT buses and those using the waterways.”

He added, “Our choices for an integrated transportation system are very clear. We would continue to search for every available means of funding for our transport infrastructure to ensure that by 2022, we would have two rail lines operational and initiate the construction of another two more lines in partnership with the private sector.

“Our desire is to achieve improved connectivity amongst transport modes, making commuting within Lagos easy, as well as business-like, for every Lagosian and visitor, reduce congestion, have predictable travel time and improve the GDP of our state.”

Meanwhile, some persons, who claimed to be tenants on Aro-Omoba Street, protested as the groundbreaking ceremony was going on.

She said personal efforts to correct the wrong has not yielded fruits, saying she has been to Lagos Metropolitan Area Transport Authority, LAMATA, offices.