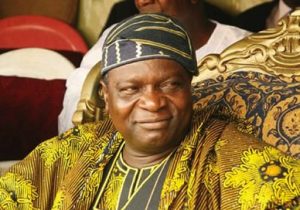 Former governor of Osun State, Prince Olagunsoye Oyinlola, has expressed conviction that it is not too late to pull Nigeria back from the brink and save the country from Boko Haram, banditry and the myriads of other security problems threatening its corporate existence.

He spoke on Wednesday in Osogbo, the Osun State capital, at a conference on “Security and Insecurity: Role of the Traditional Institution,” organised by the Centre for Black Culture and International Understanding, CBCIU.

Oyinlola, who is the chairman of the Board of Trustees of the CBCIU, lamented the present precarious security situation in the country, saying the country had almost become the modern version of the Hobbesian state “where life is nasty, brutish and short.”

While expressing confidence in the ability of traditional rulers to inspire the restoration of the country to the path of peace, growth and development, given their history and reputation as effective intelligence and security officers in their respective domains, he explained that the focus of the conference on security vis-a-vis the role of traditional rulers was informed by “the time-tested truth that at all times when things threaten to fall apart for our nation, the lot always fall on our fathers to do the pull-back from the brink.”

The CBCIU, he said, “feels that this is the time to harness the intelligence-gathering and conflict-resolution abilities of our monarchs for the safety of Nigerians and the stability of Nigeria.”

The former governor said, “While the government has continued to adopt an uneven carrot and stick approach to addressing security issues in the country, it is noted that very scant attention is being paid to the huge difference which the involvement of our traditional institutions would make in calming the furious oceans of terrorism, banditry, kidnapping and other violent crimes that currently threaten to overrun everyone and sink the ship of Nigeria.

“This conference seeks to bridge that operational gap and come up with ideas that will further tighten the noose round the neck of the enemy.”

The former military administrator of Lagos State commended the armed forces, the police and other security forces for the sacrifices they have continued to make daily so that Nigerians could be safe.

He also lauded governors for being alive to their responsibilities despite what he called the constitutional and legal absurdities that had made them chief security officers of their states without any power over all security organs operating in their states.

He added, “We note the huge resources the governors of the North East, North West and North Central states daily pump into Federal Government-owned security forces to combat terrorism, banditry and other allied crimes.

“We note, with pride, the sterling initiative recently taken by the governors of the South West states to tackle and tame violent crimes, particularly kidnapping and attack on farmers and to prevent, from coming here, banditry which has almost turned other places to ungovernable territories.

“I refer, specifically, to the Amotekun Initiative which appears to have suddenly woken up the Federal Government to the urgency of increasing its efforts at securing the lives and properties of Nigerians.”

Traditional rulers at the conference included the Ooni of Ife, Oba Enitan Adeyeye Ojaja II; the Sultan of Sokoto, Alhaji Muhammad Sa’ad Abubakar; the Olowo of Owo, Oba Ajibade Gbadegesin; the Olubadan of Ibadanland, Oba Saliu Adetunji, who was represented by the Agba-Akin Olubadan, Chief Lekan Alabi; the Timi of Ede, Oba Adesola Lawal; the Owa of Obokun, Oba Gabriel Adekunle; the Olokuku of Okuku and the Akinrun of Ikirun, Oba Rauf Olawale.