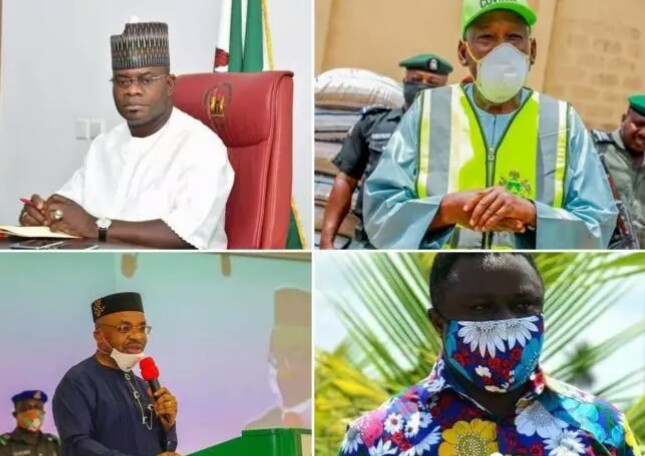 In the ongoing fight against the coronavirus pandemic in Nigeria, some governors have become heroes while the incompetence of many others has become exposed.

The Nigerian situation is not unique though; it is similar to what obtains in other parts of the world, from the United States to the United Kingdom, Italy, Australia, Brazil, Australia, Germany, and so on.

While some world leaders like Angela Merkel, the Chancellor of Germany, and Jacinda Ardern, Prime Minister of New Zealand, are being praised for their proactiveness, others like President Donald Trump of the United States are being “dragged” for their poor approaches.

Slow responses to the coronavirus pandemic and unnecessary politicking affected the efforts to contain it in many countries across the world.

For instance, the United Kingdom was slow in its response to the pandemic and it suffered for it.

In February, Prime Minister Boris Johnson still thought the virus was a joke; he was seen shaking hands in a hospital and spoke of business as usual.

Now, he has contracted and recovered from the virus and understood how deadly it is.

He has since closed schools and imposed a lockdown to contain the spread of the infectious disease.

Sadly, the slow response has had its adverse effect: the UK now has the highest COVID-19 deaths in Europe; over 30,000 deaths out of about 200,000 confirmed cases.

In the United States, President Trump downplayed and politicised the pandemic. He claimed the Democrats were overhyping the pandemic, describing it as their new hoax. Now, the US has over one million coronavirus cases with over 70,000 deaths, according to Worldometer.

In their approach to COVID-19, three key features can be identified from Johnson and Trump: slow response, politicisation, and underestimation.

Sadly, these dangerous features which led to the escalation of COVID-19 in the US and the UK are now found in four Nigerian governors: Abdullah Ganduje of Kano State, Ben Ayade of Cross River State, Yahaya Bello of Kogi State and Emmanuel of Akwa Ibom State.

Though the Federal Government was also somewhat slow in putting in place preventive measures, such as border closure and flight suspension, which is part of the reasons why we have entered this alarming stage of community transmission, it never underestimated nor politicised the pandemic.

At the time of writing this piece, Nigeria has 2,950 confirmed cases, 481 recoveries and 98 deaths.

These cases are unevenly spread across 34 states and the Federal Capital Territory, FCT.

Kogi and Cross River states are yet to record any case

When other states like Lagos, Ogun, Ebonyi, Delta, etc were taking proactive measures to prevent and manage the pandemic, Governor Ganduje was busy asking the Federal Government for N15 billion to fight the disease.

When other governors like Babajide Sanwo-Olu, Kayode Fayemi, etc were taking charge, Ganduje was accusing the Federal Government of neglecting Kano.

He was slow in putting in place appropriate measures until things got out of hand. Worse still, when the state started recording mysterious deaths, the governor was still in denial, claiming the deaths were not related to the pandemic.

The Presidential Task Force deployed to Kano has now confirmed that the deaths indeed have links with COVID-19.

When things got out of hand, the Kano State government and its apologists were busy trending #NCDCFailedKano on Twitter instead of taking responsibility.

Within three weeks of confirming the first case, Kano has risen from behind to become the state with second-highest COVID-19 cases in Nigeria, after Lagos.

The rate of community transmission is now alarming in Kano. According to Nasiru Gwarzo, the head of the presidential COVID-19 task force sent to Kano, 80 out of hundred samples tested in the state now return positive.

At the late hour, Governor Ganduje has now realised his error, admitting that the state started the COVID-19 fight on a shaky foundation.

Kano is, indeed, in trouble. It is not only the “general” residents in the state who are testing positive, many doctors (who should be taking care of the infected patients) have also been infected.

What do you think would have happened if Governor Sanwo-Olu handled Lagos the way Ganduje did Kano?

Kogi State shares boundaries with 10 states and is close to the FCT, which has the third-highest number of COVID-19 cases in the country. However, since February that Nigeria confirmed its index case, Kogi State has not submitted (enough) sample for testing.

Asked to comment on the development, Governor Bello told Channels TV that the state has developed a mobile application that residents can use to ascertain whether persons with symptoms of coronavirus should report for testing.

The Director-General of the Nigeria Centre for Disease Control, NCDC, Chikwe Ihekweasu, has repeatedly emphasised the need for testing.

He explained that the only way to understand the scale of COVID-19 is by testing.

The NCDC chief specifically mentioned the states yet to submit enough samples for testing, including Kogi.

Sadly, the Bello-led Kogi government, instead of heeding the advice of the NCDC DG, said his comment was unfair, claiming it was an attempt to shame the state.

On Tuesday, May 5, the Kogi government “politicised” the situation, claiming there was an “unholy conspiracy” to import coronavirus to the state.

Governor Bello claimed Kogi State has put in place adequate measures to prevent the disease while isolation centres are also available if the virus eventually gets to the state.

He said there is no one in the state with COVID-19 symptoms. Hence, there is no need for testing.

However, there are mounting fears now that there may be COVID-19 cases in the state, who are yet to be confirmed due to lack of testing.

One can only hope that another scenario like that of Kano does not play out in Kogi State.

Under the watch of Governor Ayade, the Cross River State’s Commissioner for Health, Dr. Betta Edu, has been making frivolous and unsubstantiated claims on the coronavirus pandemic.

At some point, she alleged that there was pressure on the state to accept that they tested positive for COVID-19.

The commissioner did not mention who was putting the pressure on them.

Edu further claimed that some residents of the state have been receiving text messages in which they are promised millions if they can claim they are COVID-19 positive.

She even went ahead to “threaten” the NCDC that any of its officials that visits Cross River will be quarantined for 14 days.

Also, against the directive of the NCDC and the World Health Organization, WHO, Governor Ayade claimed that people who put on face masks do not need to practise social distancing, because the mask protects them from being infected with the coronavirus.

This kind of misinformation coming from a state governor can lead to massive infections and deaths!

Instead of focusing on putting in place preventive and management measures, Governor Ayade, a professor of microbiology, has been dishing out false information about the pandemic, misleading the people of Cross River State and other Nigerians.

In the middle of this deadly pandemic, Governor Emmanuel sacked the state’s epidemiologist, Aniekeme Uwah, for allegedly refusing to manipulate coronavirus test figures, according to a Premium Times report.

According to the newspaper, there are reports that Uwah was removed for pushing in more samples for COVID-19 testing against the number ‘approved’ by the Commissioner for Health in Akwa Ibom, Dominic Ukpong.

The first batch of tests in the state had initially taken the efforts of Editi Effiong, a Nigerian filmmaker, who tried hard to get the attention of the NCDC to test some people with COVID-19 symptoms.

Even when the NCDC announced the first five positive cases in the state, Governor Emmanuel rejected the results, as if it was an election result!

There are other state governors whose performance so far has not been very good but the four listed in this piece stood out because of their strong stance against testing and tracing suspected COVID-19 cases.

For a virus that has killed so many people within a few months, the best way to avoid mass transmission and deaths is aggressive testing, contract tracing, effective quarantining, and patients management; until a vaccine is found.

Governor Nyesom Wike has also repeatedly played politics with the pandemic by claiming the Federal Government is only concentrating on Lagos, but he doesn’t fold his hands and allow things to get out of hand in Rivers State. He doesn’t discourage testing; he doesn’t “contest” NCDC’s test results.

To briefly address Governor Wike’s allegation that the Federal Government was politicising the situation by giving Lagos N10 billion, Sanwo-Olu, Lagos governor, did not get the fund because he is an All Progressives Congress, APC, governor as the Rivers governor insinuated; many APC governors have also not gotten any dime from the Federal Government, apart from the palliatives which were distributed to every state, irrespective of party affiliations.

Apart from the fact that Lagos is the epicenter of the pandemic, with over 1,000 cases and 30 deaths, the state government got the fund because it prepared well ahead and “showed receipts.”

President Muhammadu Buhari’s late Chief of Staff, CoS, Abba Kyari, attested to the state’s level of preparedness in a private message, published by Olusegun Adeniyi, a frontline Nigerian journalist.

Kyari was reacting to allegations that many states may be inflating the number of COVID-19 cases to get funds from the Federal Government.

This is what he said, as shared by Adeniyi, in a piece titled “Kyari’s Passage and Matters Arising.”

His words, “This (the allegation) is not charitable. Apart from Lagos, no other state has been supported. Even NCDC was given N5 billion. The budget for the country is being worked out by the task force. I doubt if we can get the preparedness, professionalism and details provided by the Lagos State Health Commissioner. We had an all-day meeting with him last Sunday and I did not hesitate in recommending the refund of the N4 billion the state has spent and the additional N6 billion needed for the next few weeks…”.

I Won’t Force Myself To Campaign For Atiku -Wike

Hats Off to Sanwo-Olu!