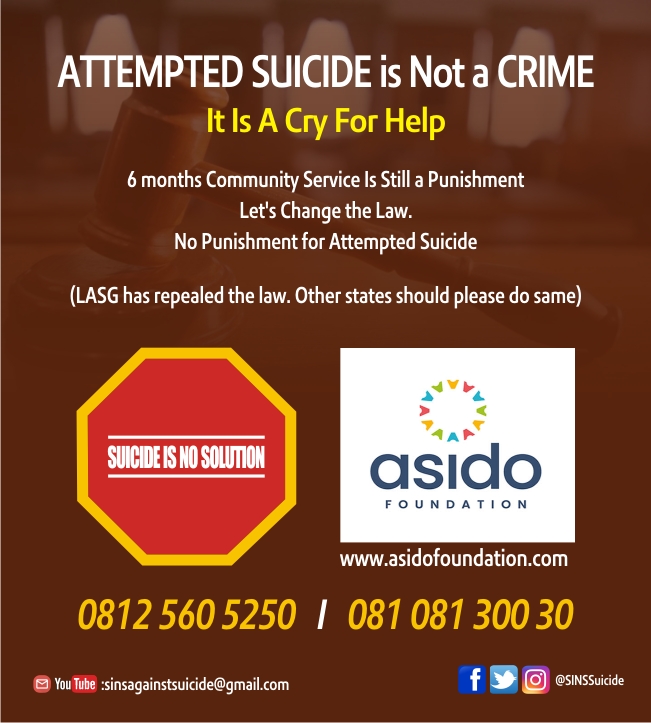 Two mental health non-governmental organisations, Suicide Is No Solution, an anti-suicide campaign initiative, and Asido Foundation, have launched a campaign against criminalising attempted suicide in Nigeria, saying that those who attempt suicide need help rather than punishment, and also emphasising that suicide is a mental health issue.

In a statement signed by the Executive Secretary of Suicide Is No Option, Ngozi Andrew, on behalf of the two groups, they stated that “attempted suicide should not be a crime.”

They averred, “Anybody who attempts to take his or her own life has come to the conclusion that life is no longer worth living. That individual is distressed, with a strong need for professional mental health care, treatment, assistance and not punishment. Attempted suicide is a loud cry for help.”

Opposing in the statement, the new bill which was recently passed for second reading at the House of Representatives, which prescribed six months’ community service and counselling for Nigerian citizens who attempt suicide, the groups emphasised that the proposed six months’ community service is still a punishment for persons with underlying mental and psychological disorder.

Ms Andrew noted that attempted suicide is still a crime in Nigeria punishable under the Criminal Code Act, Cap. C38, Laws of the Federation of Nigeria, 2004, which carries an imprisonment term of up to one year.

The groups commended the Lagos State government for repealing the law which makes attempted suicide punishable, urging other states in Nigeria to follow suit.