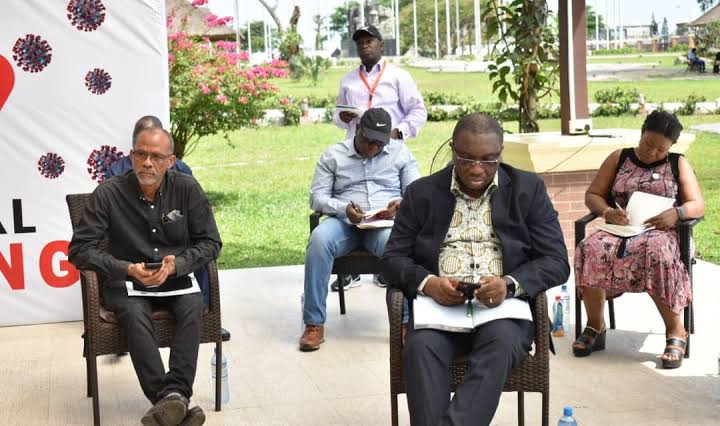 As the pandemic COVID-19 continues to take ita toll on residents and economy of Lagos State, the state government has reeled out strategies it is outting in place to cushion the effects across the State.

Speaking at an inter-ministerial press briefing to update the media about government palliatives, the state Commissioner for Economic Planning and Budget, Mr. Sam Egube, hinted that the administration will consider reordering the N1.17 trillion budget for 2020 to channel funds into ventures that will generate quick employmentand resources for Lagosians.

Held at the JJT Park in Alausa, Ikeja, the media briefing was organised by the state government to enable commissioners directly involved in the intervention programmes of the Lagos State government provide updates on the activities aimed at reducing the effects of the pandemic on the populace.

Saying that the ravaging pandemic had slowed down the growth of the state’s economy, shut down industrial production and distorted the supply chain of essential items, thereby heightening the fear of food insecurity among residents, Egube assured that the Lagos State government has started responding to the concerns of citizens.

He said, “We have started to put together post-COVID-19 response and stimulation plan to ensure our business continuity plan is riding after Coronavirus. We are going to look at enterprise; that is, Small and Medium Scale businesses that have the capacity to generate quick revenue and employment. All these economic stimulus packages will be rolled out when we have clarity on the slowdown of the spread of Coronavirus in the state.”

He added that the state will also be looking at the construction sector and agriculture, empower people with vocational knowledge and skills, saying, “We believe these investments will stimulate growth and set the economy of the state on a powerful rebound for more prosperity.”

He poibted out that the outbreak of COVID-19 pandemic had reinforced the need to draw up the database of people living in the state and advised residents to enrol with the Lagos State Residents Registration Agency, LASRRA, to enable the government update its database of residents for emergency planning and budgeting.

On his part, the Commissioner for Finance, Dr. Rabiu Olowo, said the national economy felt the impact of the twin-shock occasioned by the falling prices of oil in the international market and freezing of revenue due to the COVID-19 pandemic.

He disclosed that the state government had granted three months moratorium on accrued principal and interest payment on loans granted to Small and Medium Enterprises, SMEs, and entrepreneurs by the Lagos State Employment Trust Funds, LSETF.

He said, “Those who have loans currently running with the LSETF have been given three months moratorium by the state government for principals and interests to ensure that these small businesses that generated jobs are not hit by crisis.

“We will also be raising the capacity of LSETF to support the SMEs with capital that will act as a shock absorber and give necessary incentives to enable them mitigate the impacts. This plan is for a period after the battle would have been won against COVID-19.”

He admitted that the state revenue had been greatly affected by under-performance of businesses, occasioned by the lockdown, Olowo said it would be premature to evaluate the state’s loss at the present time.

Stating that the government had apportioned all donations it received from the private sector and the Federal Government transparently, Olowo stressed that all funds received in support of Coronavirus will be fully accounted for.

Also at the briefing, the Commissioner for Agriculture, Prince Gbolahan Lawal, noted that the Lagos Government was proactive with the introduction of its Stimulus Food Relief Programme for the vulnerable people in the state, which will cater for 200,000 families in the first tranche.

He also dismissed the misinformation about the scheme, as he explained that the state engaged Community Development Associations, CDAs, to distribute the food items, and not politicians or local government chairmen.

While confirming that the second phase of the food scheme took off early Thursday to reach aged beneficiaries registered with LASRRA, Lawal added that irregularities observed in the first phase had been addressed.

Lawal said the state government had created direct jobs for 600 individuals employed in centres where the relief package items were produced,asserting that the economies of other states were boosted, as their farmers supplied produce packaged for distribution to the aged, vulnerable and physically-challenged.

Giving a detailed insight into the latest developments about patients undergoing treatment at the Infectious Disease Hospital, Yaba, the Commissioner for Health, Prof. Akin Abayomi, attributed the success achieved so far, by the Lagos State government to the commencement of capacity build-up five years ago and the experience acquired during the Ebola epidemic in 2014.

Expressing optimism that the record of new cases in the last few days suggests that there is a gradual flattening of the COVID-19 curve in Lagos, Prof Abayomi envisaged that there will not be an exponential increase in confirmed cases in the state.

He said, “Whatever we have been doing in Lagos is working. The data we have at the moment shows that we have 145 confirmed cases; we have discharged 32 patients, who have completely recovered. We are discharging seven more patients, which will be 39 in total.”

The COVID-19 Deputy Incident Commander said, “We have had two deaths in Lagos but not in the state-owned facilities. So far, we have had 100 per cent recovery. By next week, we will be scaling up the isolation facilities to over 400 beds, as we are opening isolation centres at Landmark Event Centre and Gbagada General Hospital. We have also built more bed space for isolation inconjunction with the Federal Government and GTBank.”

The state Commissioner for the Environment, Mr. Tunji Bello, stated that agencies under the purview of the ministry, especially LAWMA, was mandated to ensure the evacuation of waste across the state during the lockdown.

Bello said, “We ensured that PSP operators go around Lagos to prevent the accumulation of waste within the metropolis during the lockdown and ensure the environment is kept clean and healthy.”

He maintained that despite the fumigation being undertaken across local governments and some bus stops within the state, there are plans in place for massive disinfection of all the highways across the state.

Bello also affirmed that the cleaning of all drainage channels in Lagos is ongoing to take advantage of the dry season before the rainy season commences fully.

The media briefing is the first in the series of activities lined up by Lagos State government to keep residents abreast of its programmes and initiatives aimed at combating the COVID-19 pandemic.