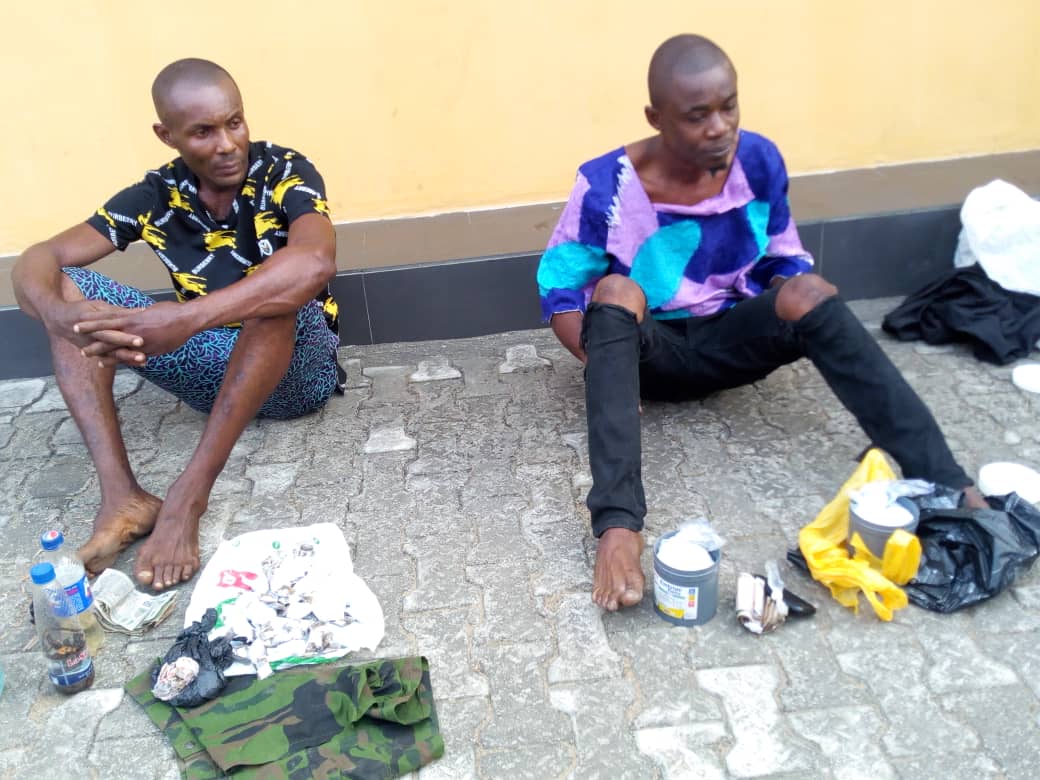 Two young men, Efangha Effangha, and Enoh-Obong Louis, have been arrested by officers of Nigerian Army 13 Brigade Akim Barracks Calabar, for their alleged involvement​ in trading in hard drugs in Cross River​ State.

The officers of the 13 Brigade of the Nigerian Army attached to the ‘OP Akpakwu,’ a security outfit by Governor Ben Ayade of Cross River State formed to tame the surging wave of kidnapping and other criminalities in the state.

Effangha 37, and Eno-Obong 34, were arrested​ in Calabar South and​ Ekpeyong Ekpo community in Akpabuyo Local Government Area of Cross River State with grammes of substances suspected to be hard drugs.

At the hand over of the suspect by officers of Nigerian Army​ 13 Brigade Headquarters, Akim Calabar, to officials of the National Drug Law Enforcement Agency, NDLEA, the Brigade Commander, 13 Brigade Calabar, Brigadier-General Abdullahi Mohammed, stated that the army is handing over the suspected​ drugs peddlers​ to officials of the NDLEA for thorough investigation and prosecution, as the Army lacked the constitutional powers to prosecute such.

Representing the​ Brigade Commander, the 13 Brigade Provost, Major Stanley Ikpeme​, stated, “The above named suspects were arrested on the 25th of February 2021​ and 26th of February 2021 by troops attached to ‘OP AKPAKWU,’ at 65 Nelson Mandela Street in Calabar South and Ekpenyong Ekpo in Akpabuyo all in Cross River State.

He added, “They were arrested with substances suspected to be hard drugs and I am directed to hand over the suspects and drugs to you for further investigation and possible prosecution.”

Receiving​ the suspects, substances suspected to be grammes of marijuana​ and an undisclosed sum of money, the Principal Staff Officer in charge of operation, NDLEA Cross River State Command, Mohammed Abubakar, stated that the command would take the substance to laboratory for test and analyses​ so as to ascertain the kind of hard drugs, so that suspects can be charge to court.

Abubakar said, “I am here on behalf of my state commander to receive the suspected drug dealers for detailed investigation and possible prosecution.”

In a brief chat with the suspects, they both denied any alleged involvement in the crime, stressing that they were wrongfully arrested by troops attached to Operation Akpakwu.

In his remarks, one of the suspected drug merchant, Effangha, who was picked at Akpabuyo, claimed he only went to the said compound to visit a friend, unknown to him that the compound had been marked by security operatives for raiding when he was picked.

Reacting to the arrest, a community leader, in Murray Street, a nearby street where one of the suspected hard drugs peddlers was arrested, in Calabar South Local Government A​rea, Mr. Romanus Edet, hailed the army for the stride, stressing that with the army, the community that has come under serious threat of drug merchants and those addicted to the​ hard drugs would be subdued.

Edet said, “It hasn’t been easy; who knows if its drug consumption that is responsible for the several atrocities in the land in recent times.”

Edet called on other security agents operating within the Calabar metropolis to beam their search lights in places like Murray, Nelson Mandela and the Bayside and Anantigha and see if many of these criminals would not be picked.

CAC Pledges Support To CSOs On Self Regulation