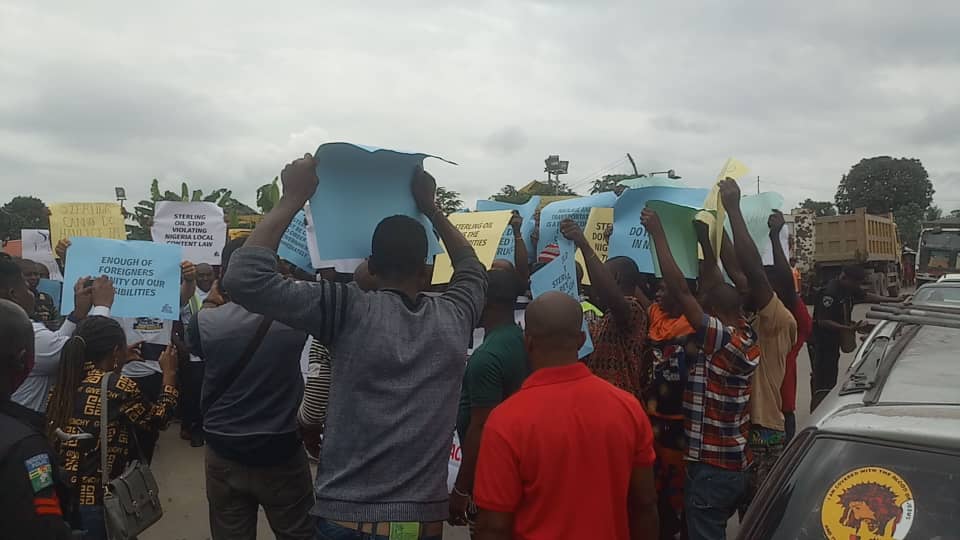 A group of truck drivers operating in Cross River State, under the aegis of Dump Truckers, yesterday blocked the Odukpani Junction over what they described as alledged take-over of haulage activities by firms owned by Indians and Chinese, thus rendering them jobless.

The truckers caused total stoppage of vehicular movement around Odukpani Junction, thus crippling business activities for hours because of the startegic point where they carried out the protest.

The protesters carried placards with different inscriptions, “We No Go Gree, “Indians and Chinese Owned Firms Have Taken over Haulage business in Cross River Rendering Us Unemployed,”
demanded the exit of Chinese and Indian-owned firms for daring to throw them out of the labour market, calling on the state government to give a listening ear.

The aggrieved protesters accused the expatriates of violating Nigerian Oil and Gas Industry Content Development Act 2010 Act No. 2, aka the “Local Content Act,” and pushing Nigerian youths into the unemployment market.

In his remarks, the National Chairman of Association of Dump Truckers, Michael Asuquo, said, “The essence of our protest is on the account of foreigners coming to take over our business.

“We are here to tell Nigerians that enough is enough; The Chinese nationalists in Nigeria have come to take over haulage activities in Cross River and Akwa Ibom states.

“Starling Oil and Gas are in Nigeria for oil and gas activities, but today they have come to import over 400 trucks.

“After deceiving us to seek loans from the banks to buy trucks we operated for just two months and they just stopped us without notice and the following week they brought in 400 trucks to take over haulage of granite activities.

“There was an agreement between us – the Association, and Starling Oil and Gas, that we are going to handle haulage of granite activities.

“Unfortunately, after giving us commitment to go and procure more trucks, they stopped us and brought in their own trucks to take over operation against our agreement on Local Content Law.”

In his earlier remarks, the Vice Chairman of the association, Safe Akene, said, “Haulage is a cottage industry and not a technical industry, so when you bring in foreign nationals you cause unemployment to us. That’s what we are avoiding.

“Foreigners coming in and deciding to do everything means they have something to hide. We cannot allow foreigners to come in here and do jobs like vulcanizing jobs, writing invoices, we don’t want it.”

The protest led to serious grid lock due to break down of traffic along Ikom-Calabar highway, forcing commercial activities in the area to witness a halt.