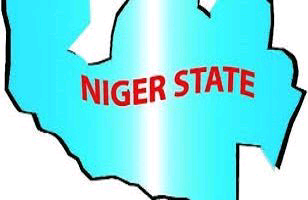 …Says ‘I Caught Him In Bed With My Wife’

For allegedly catching the Chief Imam of Enagi town in Niger State, Alhaji Attahiru Alhassan, in bed with his second wife, one Umaru Jibrin has sent the Chief Imam to the great beyond.

Jibrin allegedly stabbed Alhassan to death.
The assailant, Jubrin, 35, was said to have caught the Chief Imam, 48, and his wife in bed at a neighbour’s house.

Paraded by the Niger State Police Command at its headquarters, in Minna, the Niger State capital, on Tuesday, Jibrin narrated what transpired on the day he caught the Imam and his wife together.
He revealed that the deceased walked past him into a neighbour’s house, where his wife had earlier told him she was going to a toilet behind the compound.

He explained further that when he did not see his wife after about an hour, he decided to go searching for her and he heard her voice in the neighbour’s house.

Jibrin said, “I entered and met the Chief Imam naked on the bed with my wife. They were sleeping together. I didn’t do anything, I left them and went to my brother’s house to report what I saw.”

Jubrin further explained that he became aggravated when the Chief Imam called him for a dialogue over the incident, adding, “During the discussion, things became heated, we argued with each other and I forcefully collected the iron rod with Alhaji Alhassan and stabbed him on the neck.”

The attack on the Chief Imam led to his death, while Jubrin fled the scene, but was apprehended at Batati village in Lavun Local Government Area of the state.

Aggrieved youths of Enagi town reportedly stormed thepPolice station in an attempt to lynch the suspect, but the police relocated him to the Police Headquarters in Minna.

Briefing newsmen, the Police Public Relations Officer, DSP Wasiu Abiodun, said the suspect confessed that he killed the Imam out of anger.

He said investigation had commenced into the incident and that the suspect will be arraigned in court as soon as investigations are concluded.