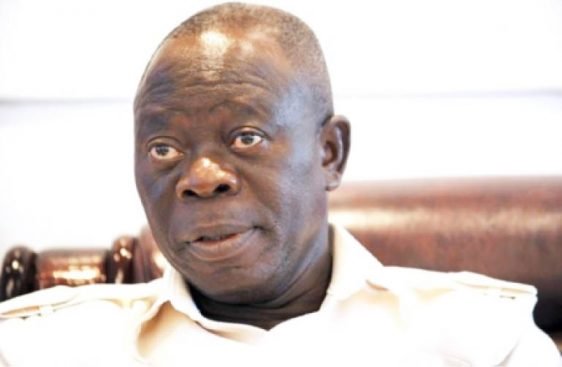 For those who are Christians and and also conversant with Bible stories, this analysis of the current travails of the National Chairman of the ruling All Progressives Congress, APC, is very much in character and content, like the story of Prophet Jonah, who heard clearly from God to go to a “great city” called Nineveh, to redeem the people from an impending doom, but chose to his own will.

The instruction was clear – go and preach against the wickedness or weakness of the people of Nineveh.

Like Nineveh, the All Progressives congress, APC, being the ruling party in a great nation of Nigeria is also great but is witnessing a period of crass indiscipline, disorderliness and near implosion which are internally induced.

Ads Oshiomhole, a former labour leader, who like late General Sani Abacha, transformed from unionism to politics, was considered a man with the wealth of experience, knowledge and diplomacy, to save the party from self destruct, in spite of being in charge.

Jonah, in verse 3, rather than heed to the divine mandate, chosen for himself a different mandate and headed for Tarshish instead of Nineveh.

He was running from the same God who had not only made him, but called him a deliverer of the people. He set his own goals. Jonah paid his ticket into a ship heading a different direction, apparently, having settled for himself a different agenda.

Yes, as a two-term governor, Oshiomhole had his money and could pay his way to a different direction from that chosen for him. He preferred to go the opposite direction, without minding the consequences, after all, he had became ahead of those he once depended on to become!

Now watch this: in the next verse, “Then the Lord sent a great wind on the sea, and such a violent storm arose that the ship threatened to break up.

“All the sailors were afraid and each cried out to his own god. And they threw the cargo into the sea to lighten the ship.”

This was where trouble began for everyone in the ship. The presence of Jonah cast a spell on all those in the ship, who were busy minding their own business. Rather than diminish despite all efforts, the storm got worse and the people decided to find out who’s responsible for this mess.

An emergency meeting was held in the ship and everyone cast lots. You can say that at the National Working Committee, NWC, meeting of the APC, the leaders all spoke!

And Jonah was found to be the cause of the heavy storm. Remember, God sent the storm, not after the people sailing in the ship, but after the renegade Jonah.

The crisis which had engulfed the APC since the coming of Oshiomhole as its National Chairman is only traceable to his deep seated agenda, which is different from that of the people who make up the bulk of leadership of the party. In trying to please one man, he is hurting several men!

Fast forward to Verse 11: “The sea was getting rougher and rougher. So they asked him, “What should we do to you to make the sea calm down for us?”

What a question? What confidence?

At the gathering of the party leadership, the question is, “What should be done to the National Chairman in order to save the party from shipwreck?

The occupants had lost their investments as they were forced to throw in their goods into the sea to make the ship lighter. Yet, that didn’t stop the raging storms.

Similarly, the APC lost very many states under Oshiomhole’s watch. From Zamfara to Bauchi to Imo to Adamawa to Rivers to Oyo. Kogi State was a near miss, while Edo State is on the brink. Bayelsa State, like Rivers and Zamfara states were the worst loss.

The sailors couldn’t lose more goods or persons, so they chose to lose one man in order to save a multitude of men and goods.

The APC must now choose between continuing losing their best of men, while keeping Oshiomhole, whose backyard is on fire already or cast him away and have peace!

Here comes the wisdom of Solomon. Jonah admitted to his guilt and refused to be selfish about it.

He said in verse 12: “Pick me up and throw me into the sea and it will become calm. I know that it is my fault that this great storm has come upon you.”

And Jonah confessed. He was humble enough to save the situation. No use being the one apple that ruins the whole basket.
Can the APC find such humility and commitment to the greater number of those who have lost so much in the party?

Oshiomhole is a typology of Jonah, but there is a virtue which he must borrow now from the character of Jonah before he is thrown out of that exalted seat.

Jonah may have been lucky to have survived in the belly of the fish, will Adams survive the heavy onslaught coming against him? It’s either he runs the ship aground and remains as National Chairman or he ends up debased in the belly of the fish, and who knows, he may be lucky to return to his primary assignment, which is to run the party devoid of selfish and hidden agenda.

If 2023 is the reason for the heavy storms in the party, definitely, he can’t be neutral; but he can be sacrificed like Jonah.
The decision to repent is his.