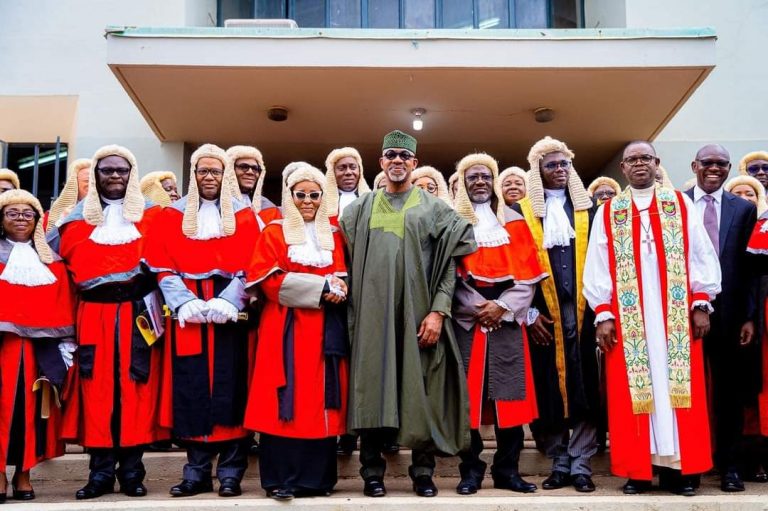 As the nation prepares for the 2023 general election, the governor of Ogun State, Prince Dapo Abiodun, has called on officers of the judiciary to be wary of the antics of politicians who would use frivolous court injunctions to thwart the smooth running of the poll.

A statement by his Chief Press Secretary, CPS, Kunle Somorin, quoted Governor Abiodun as making the call at a special church service on Monday to usher in the 2022/2023 legal year, held at the Cathedral of St. Peter, Ake, Abeokuta.

Prince Abiodun noted that the election period has always been the time when politicians use court processes for their selfish ends, and called on the judiciary not give room for any politician to tarnish the image of the third arm of government.

The governor said, “We are all aware that this country is preparing for another election in a few months’ time, beginning from February, 2023. There will be heightened political activities and politicking. You should expect barrage of applications for injunctions. I trust that members of the Bench in the Ogun State judiciary appreciate the fact between objectivity and machinations of selfish politicians, who just want to take advantage of the judicial process to thwart the smooth running of the elections.

“Therefore, I admonish you to be wary of entertaining frivolous injunctions from the political class, in particular, as we move towards the 2023 general elections.”

He further urged the legal officers to recognise that in a fledgling democracy, they must continue to be a strong pillar for the survival of democratic principles and preserve the rights of the people, who are the sole essence of government, while at the same time act as balancing scale between the executive and the legislative arms of government.

Emphasising that judicial processes and procedures have direct link to economic development, as local and foreign investors must have trust in the judicial processes, Governor Abiodun enthused, “This would give them the assurances that they would get fair hearing in any case of probable misunderstanding.

“Your processes are directly linked, not just to crime reduction, but also to employment generation, poverty alleviation and food security. In fact, when the people are gainfully employed, there will be less criminal tendencies. The courts will have fewer criminal cases to attend to. In short, as an important and the third arm of government, the judiciary must continue to place itself in good stead as a reliable and trusted institution, which is the last bastion of hope for the common man.”

Lauding the Ogun State judiciary for keeping the legacy bestowed by the founding fathers, Governor Abiodun maintained that the state has played a pioneering role in the evolution and development of a modern system of laws in Nigeria and in the West African sub-region, urging the current crop of members of the bench to keep the tradition of integrity, diligence, industry and excellence that Ogun judiciary is reputed for.

He added, “It is also important that our members of the bench also recognise the fact that the project called Ogun State is still a work in progress. The bench and the wig place on your shoulder a big responsibility to the society. Your pronouncements on or off the bench must continue to reflect wisdom, credibility, tact and all other positive values which the wig symbolises. You must continue to ensure justice at all times, irrespective of whose ox is gored.”

Delivering his sermon at the special service, the Bishop of Methodist Church, Remo Diocese, The Rt. Revd. Bamidele Ibikunle, noted that justice is daily tested in Nigeria, as greed and covetousness have assumed new dimension.

Taking the text o the sermon from the Book of Jeremiah, chapter 6 verse 10, the cleric noted that corruption, insecurity and economic woes remain the main challenges confronting the country, adding that many Nigerians are pre-occupied with how to make money and amass wealth, without caring about how it is gotten.

Bishop Ibikunle opined that to solve the many problems plaguing the nation, judges and judiciary workers must shun corruption and deliver judgement expeditiously, while those in authority should deal fairly, justly, and equitably with the people, knowing that all mortals would render account of their stewardship to God at the end of their journey on earth.

The only lesson for the service, which was taken from Acts of the Apostles, chapter 8, verses 26 through 40, was read by the Chief Judge of the state, Justice Mosunmola Dipeoulu.