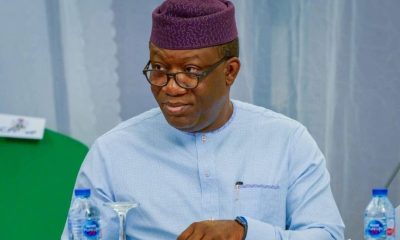 The governor of Ekiti State, Dr. Kayode John Fayemi has been described as  the pride of Ekiti State blessed with humongous intelligence and rich administrative capacity, which he has brought to bear in all the offices of responsibility he has occupied.

The Oore of Otun Ekiti, Oba Adekunle Adebayo Adeagbo, who gave the description while receiving in audience the Senior  Special Assistant, SSA, to  Governor Fayemi on Tourism Development, Ambassador Wale Ojo – Lanre, in his palace, in Otun Ekiti, also revealed that “God Almighty also capped him well by blessing him with a responsible, hardworking, pleasant and God-fearing wife, who reinforces his good acts and deeds.“

The traditional ruler disclosed that Governor Fayemi has an impressive track of enviable and credible performance  as a human rights advocate, a writer, a fighter for democracy, a peacemaker, a minister and a governor, adding that in all of these offices, he has proved beyond reasonable doubt that he is a man who can be trusted.

Oba Adeagbo said that Governor Fayemi, “though cosmopolitan and super exposed to the international taste has never allowed this to becloud his appreciative sense for cultural value and respect for tradition.“

Oba Adeagbo said, “I have keenly studied his value orientation policy, clinically analyzed his cultural – tourism programme and monitored the strategic implementation of his cardinal visions and come to the conclusion that he is on a mission to emancipate Ekiti from lack to prosperous abundance and we have the duty not only to support him for the benefit of all, but also to contribute our own quota to reinforce his advancement strides.”

Promising to mobilize his people to rally support for the rapid development of Moba, Oba Adeagbo happily donated a building and land for the planting of the First Otun Palace Heritage Museum of History.

He averred, “In my study of Governor Fayemi’s  strategic cultural – tourism policy, I have noticed his intention of creating heritage museum for the preservation of pristine cultural items, historical antiquities, royal memorabilia, and other seasoned items that can illuminate and connect the present generation to the historical past of past generations.

“It is on this note that we in Otun have sequestered a land and a building  at a conspicuous part of the Oore Palace for such a wonderful intergenerational project.“
Commending Ambassador Ojo – Landed for his energetic passion with which he drives any assignment hurled on his shoulder, Oba Adeagbo added that his appointment as Senior Special Assistant on Tourism Development to the Governor of Ekiti State is a plus to the state, considering his exploits in the global tourism stage.