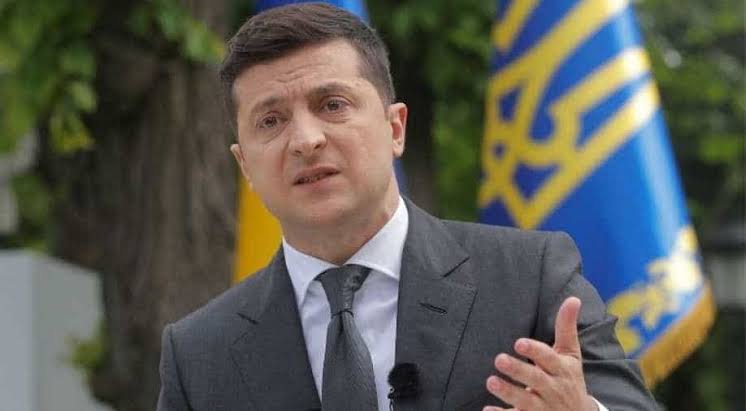 Embattled Ukriane has accused the West,led by the United States of America, USA,and the North Atlantic Treaty Organisation, NATO, of abandonment President of Ukraine, Volodymyr Zelensky has accused the West led by United States and NATO of abandoning his country and unreadiness to fight to
defend Ukrainians following Russia’s military bombardments of the last 48 hours.

President Volodymyr Zelensky, who said this, noted that non admission Ukraine into NATO, where Article 5 can be activated to militarily fight on behalf of a member state means that Ukraine will have to take her destiny in her own hands and enter negotiation with Russia on neutrality.

He added that he was not afraid to negotiate an end to the Russian “invasion,” but would need security guarantees to do so.

Zelensky was speaking in the early hours of the morning from Kiev, saying that he had reached out to “partners” in the West to tell them that Ukraine’s fate was at stake.

He said, “I asked them – are you with us? They answered that they are with us, but they don’t want to take us into the alliance. I’ve asked 27 leaders of Europe, if Ukraine will be in NATO, I’ve asked them directly – all are afraid and did not respond.

Russia had in Thursday sent troops into Ukraine, with Russian President Vladimir Putin declaring a special military operation to “demilitarize and denazify” the country. Moscow has since told Kiev that it would consider negotiating with the Zelensky government if it agrees to discuss neutral status for the country, among other things.

In an address on Friday, Zelensky said he is open to talking about the possibility of a neutral status for Ukraine, but insisted that his country needs third-party guarantees.

He further added that there should be talks to bring an end to the Russian military offensive.

Kremlin spokesman, Dmitry Peskov, had said on Thursday that “neutral status and rejection of hosting [offensive] weapons systems” are Putin’s “red lines” for Ukraine and that the ball was now in Kiev’s court.