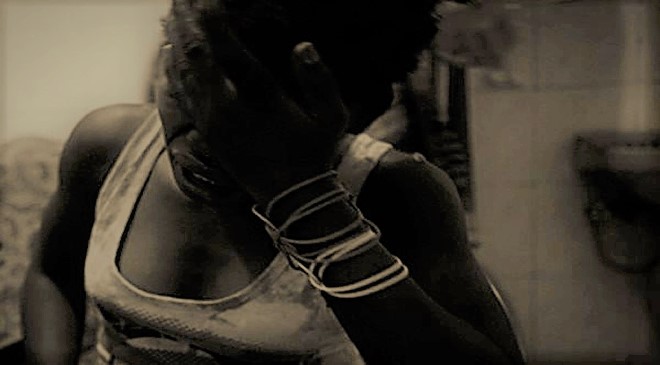 By Vanessa Okwara
A housewife, 38-year-old Mrs. Njideka Ikechukwu, in connivance with her lover, 30-year-old Silas Orji, has allegedly killed her husband, Uchenna Ikechukwu, by sprinkling him with petrol in his sleep and setting him on fire for having the guts to engage Orji, in a fisticuffs previously in the public.

Njideka, with the help of Orji, had reportedly poured petrol on her husband of 20 years, while he was sleeping around 3 am on Thursday, May 14 at Umueze Community, Aba town, Abia State, where they reside and set fire on him.

Uchenna was said to have been burnt beyond recognition and died in the process. However, the devilish housewife and her lover, Orji, who is a mechanic apprentice under the deceased have been arrested and handed over to the police.

According to one of their neighbours, late Uchenna returned from work at about 7 pm from his mechanic workshop, and had dinner before watching television till around 1 am before he went to sleep.

But, around 3 am in the morning, his wife, Njideka and her boyfriend, Orji, sneaked into Ikechukwu’s room, where he was sound asleep. Njideka reportedly took a jug filled with petrol, which she sprinkled on his mouth and around the bed, before Silas lit a match stick and fled the spot.

The fire that erupted later spread across the house and Ikechukwu was burnt while still sleeping. The police were notified by the neighbours, after which a team of police and forensic officials arrived the scene for on the spot inspection and investigation.

Meanwhile, the suspects, who allegedly fled the scene of their dastardly act to hide in an old uncompleted building, about 10 kilometres away from the village, were caught through the tracing of their footprints left behind in the sand dunes from the site of the incident.

According to the neighbours who volunteered information to the police, Njideka got married to Uchenna, a resident of Isiala Ngwa village, about 20 years ago; but the couple are always quarreling in the house which the deceased had built for the family to live in.

Njideka’s boyfriend, Orji, an apprentice under her husband, was said to have been engaged in a fierce fight with the late Uchenna two days before the incident.

A police source disclosed that the suspects, after thorough investigation, will be charged to court for murder, which attracts life imprisonment punishment, should they be found guilty after trial.