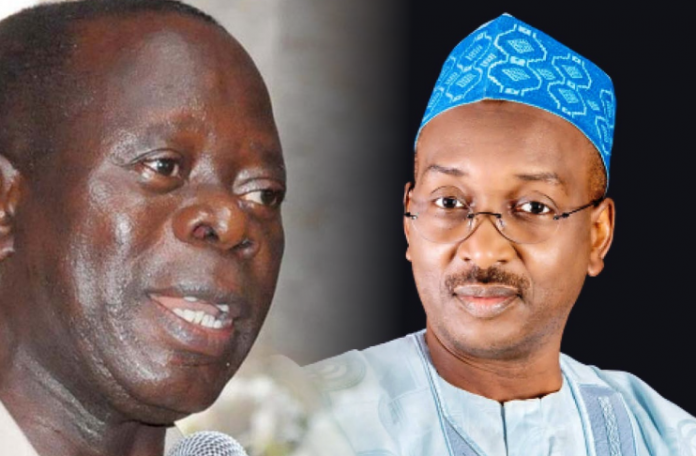 Better to remain silent and be thought a fool than to speak out and remove all doubt. -Unknown.

I am a practising Muslim, but I have adequate understanding of the Bible and I am aware of the verse that says: Even a fool is thought wise, if he keeps silent, and discerning, if he holds his tongue.

In the biblical version, one is thought wise if one remains silent, but in the earlier quote by an “unknown,” the word “wise” is not used. Remaining silent simply allows one to avoid the fate of being thought a fool or stupid.

The recent diatribe credited to the immediate past Chairman of the All Progressives Congress, APC, Comrade Adams Oshiomhole, against the Director General of the Progressive Governors Forum, Dr. Salihu Lukman, seems to tally with these two analogies.

I must confess here that I am neither a good friend nor a strong admirer of either Comrade Oshiomhole or Dr. Lukman. I have known both of them as firebrands and close allies in the labour union activity days. Not for once did Lukman come to me as a pushover or numbskull without a mind of his own, who could easily be manipulated by anyone, not even by Oshiomhole himself.

Dr. Lukman’s radical nature is legendary. He is an activist per excellence and, as I earlier hinted, had been a close associate of Comrade Oshiomhole all along. This perhaps explains his active participation in student unionism in the late 1980s, resulting in his becoming the president of the National Association of Nigerian Students, NANS, in 1988/1989.

After his NYSC scheme in 1991, Lukman got an instant appointment as the National Secretary of the Committee for the Defence of Human Rights, CDHR, in Lagos. In 1992, his activism caught the attention of Oshiomhole, who encouraged him and facilitated his getting appointed as the Research Officer of National Union of Textile, Garment and Tailoring Workers of Nigeria, in Kaduna, the same union which Oshiomhole served as the General Secretary.

In 2002, Oshiomhole, as the President of the Nigerian Labour Congress, NLC, again facilitated Lukman’s appointment as the Education Secretary of the NLC, the position Lukman held until 2006, a year before the expiration of Oshiomhole’s tenure as the President. Lukman then returned to Zaria to form Movement for a Better Future as a platform for community organizing and development.

From 2009, Lukman served as the General Organizing Secretary/CEO of Good Governance Group (3G). He was also among the group of 54 Nigerians that initiated the formation of the Save Nigeria Group, which he coordinated its activities in Abuja.

Of course, with my little knowledge of Dr. Fayemi, I doubt if the latter would bother himself to respond to Oshiomhole’s spat. Even in his silence, Fayemi’s wisdom cannot be matched by Oshiomhole’s. That, anyone reasonable enough can attest to. Neither would I expect Dr. Lukman to try and disprove his “pig” status, as alleged by Oshiomhole. The pig is already known.

But the question to ask the flippant Oshiomhole at this juncture is this: Between him and Fayemi who first knew Lukman, and who is capable of foisting him on the other person, assuming Lukman is such a pliable personality?

I will like to conclude this view of mine with a short story:

Once upon a time, a student went to his teacher and asked a question: “Sir, is there any good in talking a lot?”

The teacher replied: “Toads and frogs croak night and day, yet no one pays any attention to them. But the cock crows at a certain time of night and wakes up everyone.”

The teacher smiled at his student and added, “This proves that no good is achieved by talking a lot. What is important is to say the right thing at the right time.”