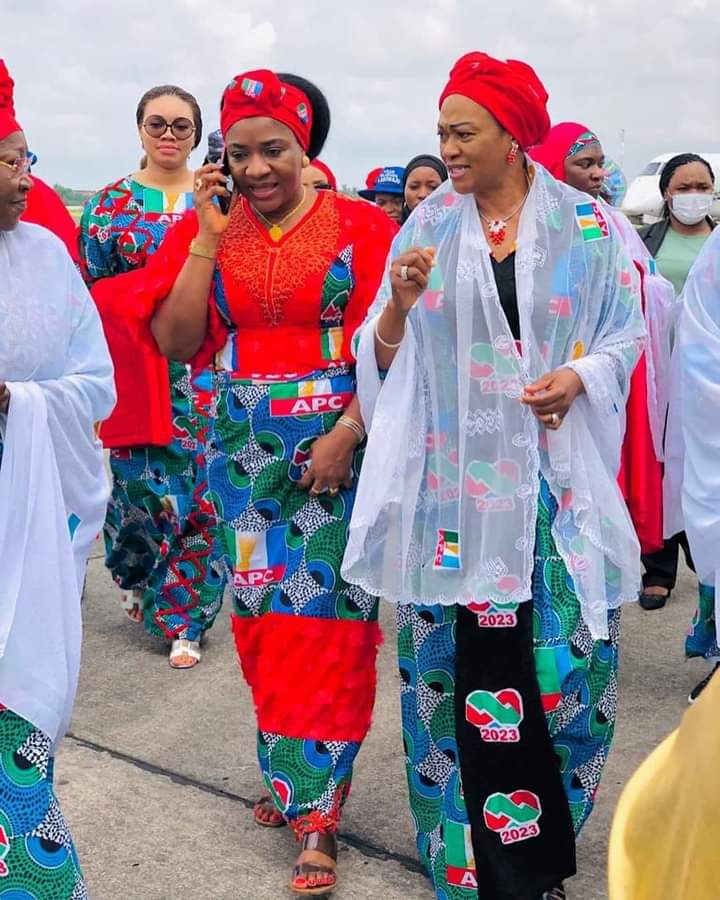 The wife of the governor of Cross River State, Dr. Mrs. Linda Ayade, has described the All Progressives Congress, APC, presidential flagbearer, Asiwaju Bola Ahmed Tinubu and his running mate, Mustapha Shetima, as Nigeria’s only renewed hope with capacity to turn around the fortunes of the nation from 2023.

Dr. Ayade stressed that it is only when South-South women join forces with other distinguished Nigerians to put their weight solidly behind the APC presidential candidate and his running mate to win election that the fortunes of the nation can be turned around.

Ayade’s wife described Tinubu and Shetima as renewed hope, while speaking at the South-South APC Women Rally, convened by Ayade’s wife to mobilize women in the geo-political zone to put their weight solidly behind the Tinubu/Shetima ticket in the forthcoming 2023 presidential election.

She stated that it is only when women in the South-South geo-political zone of the country join their hands with other distinguished Nigerians to vote the duo that the fortunes of the nation can be turned around for good.

The governor’s wife averred that with Tinubu and Shetima, the economy of the country can be renewed to make the country great once again, stressing that the only way forward is through their PVCs.

Dr Ayade said, “We, the progressive women of the South-South are here today to reiterate that support and to say that ‘yes, we are ready for the renewed hope for Nigeria.’

“I want to thank you all for the opportunity you have given us here in Calabar to play host to this rally; to gather all the women from the South-South to come and shout out their support for our dear candidate of our great party.

“I charge you all women of South-South that if you know you have not collected your PVC, make sure you pick it up from INEC.

Also speaking the APC National Women Leader, Dr. Betta Edu, boasted that a machinery has already put in place to ensure that the women give the APC presidential candidate and his running mate 40 million votes from the women across the country.

While urging the women to be prepared ahead of the election, Edu said, “If you don’t have your PVC, you are wrong. Don’t let anybody give you money in exchange for your PVC.

“Tinubu has empowered his wife, who is a christian, to rise to the position of senator.

“He has supported women and we have seen it. When you return to your states and local government areas, please mobilize women so that we can cast our votes in support of Tinubu and Shetima.

“I am very pleased, because we have so many governors who are supporting Tinubu.”

In his remarks the chairman of the APC in Cross River State, Alphonsus Eba, pledged to use his office to ensure that 500,000 votes remain intact for Tinubu/Shetima.