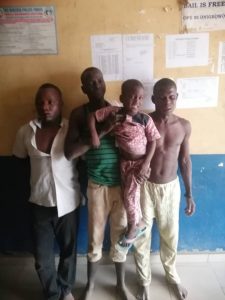 The suspects were arrested following a complaint by the mother of the child, one Nimota Adeniran, who reported at Warewa police station that she was alerted by one of her neighbours that her son was sighted with three strange men at Arepo bus stop, along Lagos-Ibadan expressway, where they were waiting to board a vehicle to only God knows destination.

Upon the information, she started looking for her son, only to discover that he was no longer where he left him.

On the strength of the report, the Divisional Police Officer, DPO, of Warewa division, SP Folake Afeniforo, quickly mobilized a team of policemen and raced to the bus stop where the men were said to be waiting to board a vehicle.

And on getting there, the three men were met with the child in their possession and were promptly arrested with the help of members of the public.

On interrogation, the three suspects who claimed to have come from Jigawa State can not give any reasonable account of why the child was seen with them or why they wanted to board commercial bus with the child.

Meanwhile, the child has been reunited with his parents, while the suspects are undergoing interrogation.

The Ogun State Commissioner of Police, Kenneth Ebrimson has ordered the immediate transfer of the suspects to state Criminal Investigation and Intelligence Department, WCIID, for discreet investigation and possible prosecution.

The CP therefore advised parents to always take the security and wellbeing of their children serious in order to shield them from those looking for every means to be rich.