A Senior Education Officer, serving with Ebenezer Primary School, Ifako-Ijaye, Lagos, Mrs. Fausat Adegeye, has received commendation for initiating free online classes for some school pupils on Facebook, since the closure of schools occasioned by the COVID-19 pandemic. 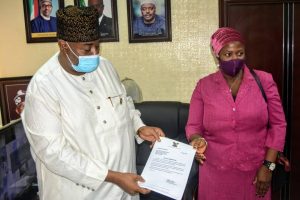 The commendation came from the Executive Chaiman of Lagos State Universal Basic Education Board, LASUBEB, Hon. Wahab Alawiye-King and other members of the Board, who described her efforts and initiative a “selfless effort.”

Mrs. Adegeye was described by the LASUBEB Executive Chaiman, Hon. Alawiye-King as a resilient worker, who is capable of moving basic education forward in the state.

As a mark of recognition of Mrs Adegeye’s innovative efforts, a letter of commendation was presented to her on Friday, May 15, by the LASUBEB boss, Hon. Alawiye-King, for the impactful initiative.

The letter was presented to her at LASUBEB Head Office at Maryland, Ikeja in recognition of her selfless service at ensuring that pupils in primary 1 to 6 acquire English Language proficiency during the period of school closure.