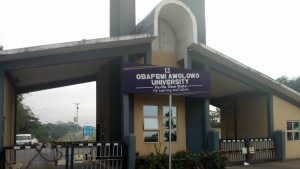 *He’s In Our Custody -Police

A suspended lecturer with the Center for Distance Learning of Obafemi Awolowo University, Ile Ife, Moro Campus, Monday Omo’etan, forcefully had oral sex with a female student of the centre, it has been learnt.

Announcing Omo’etan’s suspension over the matter, a statement by Abiodun Olanrewaju, the institution’s Public Relations Officer, reads, “Less than three weeks after the management of Obafemi Awolowo University, Ile Ife, expressed her zero tolerance against sexual harassment by investigating and suspending a lecturer of the Department of International Relations, Mr. Olabisi Olaleye, the university has suspended a staff of the University’s Centre for Distance Learning for sexually molesting a 19 years old female student.

“The University has also handed over the tutor, Mr. Monday Omo – Etan, to the Police.”

Omoetan, a Chemistry teacher in the centre, was alleged to have indecently assaulted the victim, said to be 19 years of age, in his office in Moro; but unknown to the lecturer, while forcing the victim to have oral sex with him, the act was video-taped and the clip was released to internet.

Sources in Moro Campus also told CompassNG that the video was obtained by some management staff of the institution, who informed the police on Sunday and the suspect was immediately arrested.

Confirming Omo’etan’s arrest, the Osun State Police Commissioner, Johnson Kokumo, said that the suspect was already in the custody of the command.

Kokumo, who said the suspect was not a direct staff of OAU, but a tutor at the Distance Learning Centre of the University in Moro, promised diligent investigation into the matter.

Speaking through the Command spokesperson, Folasade Odoro, Kokumo said Omo’etan was video-taped while having oral sex with the victim, adding that investigation into the matter would unravel other hidden incidents connected to it,even as he assured that anyone found culpable would be made to face full wrath of the law.