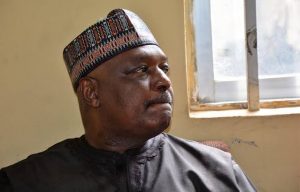 The Supreme Court, on Friday, February 7, affirmed the conviction and the 12-year jail term handed down to former governor of Taraba State, Nyame, for misappropriation of funds while he was governor of the state from 1999 to 2007.

A five-member panel of the apex court, led by Justice Mary Odili, in a unanimous decision, said it found no reason to set-aside concurrent judgements of both the trial court and the Court of Appeal, which found the former governor guilty of funds misappropriation.

While delivering the lead judgement, Justice Amina Augie, held that the appeal filed by Nyame to challenge his conviction and sentence lacked merit, she however held that the appellate court erred in imposing fine against Nyame.

The court thereafter affirmed the 12-year jail term imposed on the former governor, freed him from paying fine imposed by the appellate court.

Recall that in May 2018, Justice Adebukola Banjoko sentenced Nyame to jail, summarising how she came about the judgement. She identified various confessions of fraudulent transactions, adding that the evidence against the defendant was overwhelming.

The judge added that even the defence witnesses alluded to the crimes the accused was charged with, likening the conduct of the prescribed offences to the story of Alibaba and the forty thieves.

The court had said, “From the evidence alluded in court, transactions by the treasury of the Taraba State government began with a memo. Now a memo has a root course that is traceable to a decision.”

While questioning Nyame’s failure to investigate the illicit flow of funds under his watch, she said, “It is only under cross-examination that the defendant said he did not carry out the investigation, because the EFCC was already carrying out a similar investigation.”

Noting witnesses’ confessions, including that of the managing director of Saman Global that his company was not involved in the delivery of stationery; the court averred, “If Saman Global has no history of supplying stationery into Taraba State, then their injection into the flow must have been questionable.

Justice Banjoko found the defendant guilty of 27 of the counts, which bordered on allegations of criminal breach of trust, receiving of gratification, obtaining without due consideration and misappropriation of public funds.

Before the verdict, the defence counsel, Oluwaleke Atolagbe, pleaded for leniency for his client, considering that he had never being convicted of such offences and that he was a family man who had served his state for at least eight years.

While expressing disappointment at the conduct of the accused in her ruling, Justice Banjoko said, “But I must say that I am morally outraged by the facts of this case. The people of Taraba State had elected the defendant, a clergyman, on three different occasions.

She, therefore, sentenced the defendants to various terms based on the four categories of offences, to a maximum of 14 years in jail, without an option of fine and further ordered the return of forfeited funds from the treasury of the Economic and Financial Crimes Commission, EFCC, to that of Taraba State.

At the Appeal Court, the jail term was reduced to 12 years, while the former governor was asked to pay a fine of N495 million for the alleged misappropriation of funds.

The appellate court said Mr Nyame ought to have been given capital punishment, but for the constitutional constraint on the court to stick to the provisions of the law.