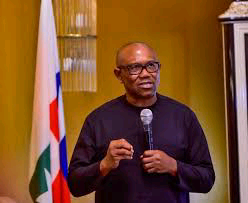 …Network Marks His Birthday, Visits Ophanages On His Behalf

There are now growing supports for former governor of Anambra State and presidential candidate of the Labour Party, LP, in the 2023 presidential election, Mr. Peter Obi, in Kwara State.

In Ilorin, the state capital, his admirers and supporters, under aegies of ‘Peter Obi Support Network,’ trooped out to mark the 61st birthday of the LP presidential flagbearer in a convoy of cars and visited ophanage homes on a charity mission.

The network, made up of members of the academia, students, youths, businessmen and artisans, went to the homes to give out to the less privileged children on behalf of the politician.

The homes visited included: Kwara State Government Motherless Home, along Pipeline Road and the City of Refuge F&G Ophanage, both in Gaa Akanbi area of the city.

They were led by the state Co-ordinator, Mr. Nwora Aloysius, with cartons of noodles, pasta and toiletries.

Speaking with journalists after giving the items to the government motherless home’s management, Nwora said the Peter Obi Support Network is a volunteers’ group nationwide, having its chapters in all the sixteen local government areas of the state.

He averred that the group has over 300 co-ordinators, made up of Muslims and Christians in the local government areas of the state, who are made up of people in the academia, clerics, as well as having its youth wing in the state’s sixteen council areas.

Nwora added that the same is replicared in all the wards in Kwara State, with many canvassers, who earnestly wanted Peter Obi to become the next President of Nigeria.

Nwora, an Ilorin-based business man, said that members of the Support Network are willing volunteers, who are ready to give out from their means to oil the movement, insisting, “This is what Peter Obi would do for the needies and so, we are doing it on his behalf, as he celebrates his 61st birthday.

“I am not a politician. I am a Christian. Though a business man, I am not apolitical, but all the same, I was a witness to what Peter Obi did as the governor of Anambra State. He was prudent with the public resources, a goal-getter. He sets before himself a development agenda and does everything nearly possible to get it done.

“Peter Obi was not in politics to amass wealth, but to take care of the needies. What we are doing is in agreement with his principles. Obi, as the governor at the time, asked every community in Anambra State to choose N20 million projects each and pick contrators of their choices to do the construction which he paid for.

“Not only that, then Governor Obi offered to personally supervise the projects along with all the communities, and the LP flagbearer
did so. His legacies are still there in Anambra State for everyone to see.”

Earlier, Professor Bode Olumorin, the Co-Coordiator of Peter Obi Support Network, while speaking at the City of Refuge Orphanage, said that they decided to raise the gift items on behalf of Mr Gregory Peter Obi to show Nigerians the type of kind heartedness that Obi has for the country, the people in general and the less priviledged in particular.

He said that people like him, devoid of ethnic, religious or any form of bias had found in Peter Obi, the type of leadership that would get to the grassroots, have a feel of their yearnings and passionately attend to it in Nigeria.

He said that Obi by his good antecedents does not go and give money to buy or deceitfully induce people, but rather, get to know their feelings and attend to it appropriately.

The gifts items were to be distributed to motherless babies whose father dropped in the home but to come and pick two years later, the physically challenged, children taken from lunatic mothers, disputed children and lost-but-found babies brought to the homes by the police.