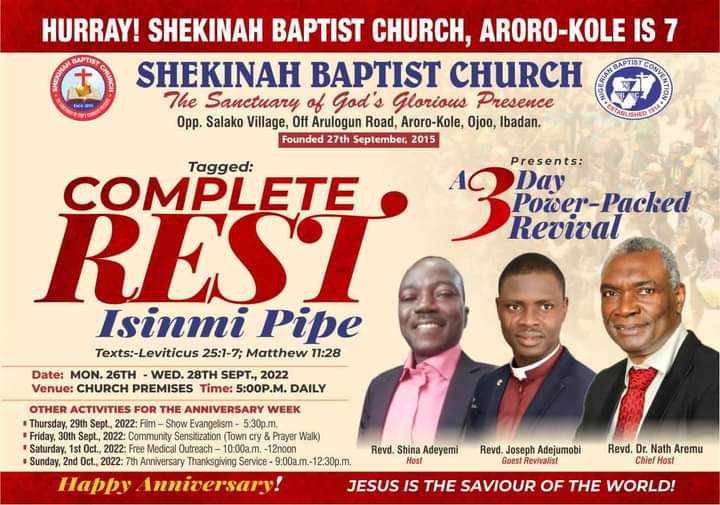 Tagged: ‘Complete Rest,’ with the Bible passages taken from the Book of Leviticus, chapter 25, verses 1 through 7; and the Gospel according to Matthew, chapter 11, verse 28, the anniversary activities included: a three-day power-packed revival service, which held from Monday, September 26 through Wednesday, September 28; a film show titled ‘Enough a Enough,’ which held on Thursday, September 29; special anniversary community sensitisation (town cry) and prayer walk on Friday, September 30; and medical outreach for the church’s neighbours and residents if the host community, Aroro-Koke, in Saturday, October 1.

The climax of the week-long activities was the anniversary thanksgiving service, which held in Sunday, October 2.

The guest preacher/revivalist at the three-day revival, Revd Joseph Adejumobi, in his sermon emphasised on the importance that God, who initiated the principle of rest, attached to it.

Revd. Adejumobi said that rest in God’s character as He Himself demonstrated when He rested from His creation work on the seventh day, after creating the heaven and the earth and everything there in.

He emphasised on the number seven, which he said connoted rest, according to Biblical God’s Injunction, informing his audience that what is required of them to have complete rest in the Lord is to be children of God.

In his anniversary sermon at the anniversary thanksgiving service on Sunday, October 2, with the Bible passage taken from the Book of Isaiah, chapter 40, verses 28 through 31, and titled ‘Forward Ever and Backward Never,’ the under-shepherd of the church, Revd. Daniel Adesina Adeyemi, told his congregation, who he described as ‘wearied men,’ the need for them to receive rest from the ‘unwearied God,’ who is not only the architect, but giver of rest.

He emphasised on verse 31, which says: ‘But those who hope in the LORD will renew their strength. They will soar on wings like eagles; they will run and not grow weary, they will walk and not be faint,’ challenging his listeners to always wait on the ‘unwearied God’ to renew their strength and obtain the needed rest.

Before the sermon, Revd. Adesina had thanked his congregation for their support for his ministry and love for his family in the last seven years.

He also went down memory lane to remind the church about its modest beginning in 2015 and it’s growth to the present time, after seven years.

The highlight of the service was fraternal and solidarity messages from the mother church, Shalom Baptist Church, delivered by the incumbent Evangelism Committee Chairman of the mother church, Deacon Kolawole Elisha Idowu, which emphasised on the need for the church to remain united in purpose to fulfil God’s will.

Deacon Idowu expressed gladness and sadness at the same time, insisting that he is happy that Shekinah Baptist Church is celebrating her seventh anniversary, but sad that the church is yet to grow to it’s potentials.

He therefore challenged every member to rise up to the occasion to ensure that the church grows to be reckoned with in it’s host community and attains it’s full potential.