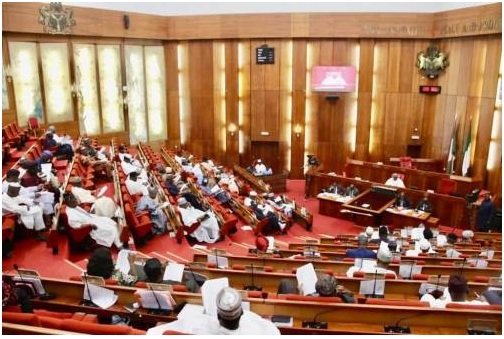 The upper legislative chamber of the National Assembly has on Tuesday mandated its Committee on Ethics, Privileges and Public Petitions to investigate the alleged invasion of rice traders’ shops at the Bodija market, Ibadan, the Oyo State capital, by men of the Nigerian Customs Service, NSC, which resulted in the carting away of goods and cash to the tune of N85 million.

The development was the fall out of the receipt of a petition from the Ibadan Foodstuff Sellers Association, IFSA, addressed to the Senate President through Senator Kola Balogun, the senator representing Oyo South senatorial district.

The Ibadan Foodstuff Sellers Association, in the petition to the Senate President said, “The above-named association writes to report the unfortunate night invasion of the Bodija International Market, Ibadan and the forceful breakage of the rice traders’ shops by men of the Nigerian Customs, Ikeja Unit, Lagos on 31st March through 1st April, 2021.

“It is pertinent to report to you, Sir, that five (nos) shops still remain under special white padlock, the same that were put on the forcefully broke ones.

“The Ibadan Customs Unit has advised us not to unlock the locked shops for reasons unknown to us and owners of the shops have been rendered helpless. They cannot access their shops and neither can they trade in anything. Their families have been suffering.

“We seek the intervention of your highly esteemed office for the immediate return of all the items and cash carted away from our shops and warehouses.

“We also seek for the Red Chamber’s investigation into the reasons behind the forceful raid on our shops. We demand that such raid should stop henceforth and this one should be the last of such action on the innocent peaceful traders in our market.

“We demand that tight security arrangements be put in place in the market by the government to protect our products after closure from business activities of the day to avoid looting of our shops by hoodlums who might want to follow the illegal footsteps of the men of the Nigerian Customs Service.

“We demand that the Nigeria Customs should be warned against the use of the crude and cruel method of infringing on traders’ properties and products.

“That the action of the Nigeria Customs is seriously infringing on our rights to trade in legitimate items within the country as the midnight invasion violates all democratic principles.”

Senate President, Lawan, referred the petition to the Senator Ayo Akinyelure-led Committee on Ethics, Privileges and Public Petition for investigation and recommendation.