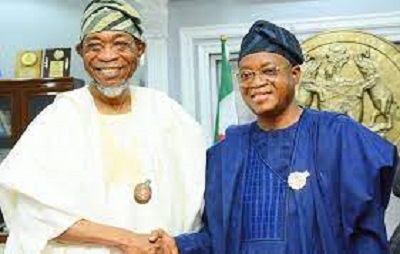 A group under the aegis of Osun Shall Rise Again, OSRA, has called on the former governor of Odún State and Minister of the Interior, Ogbeni Rauf Aregbesola, to stop distracting Governor Adegboyega Oyetola and face Federal Government’s internal security mechanism.

OSRA, in a press statement signed by its Chairman and Secretary, Saheed Bakare and Lanre Akeju, respectively, and made available to journalists in Osogbo, described the call by some Aregbesola’s loyalists to probe the alleged attack on the former governor’s aide and cousin, Teju as misplaced and laughable.

It averred that the Police, which is already handling the probe should be allowed to do its job, even as it warned Aregbesola to stop distracting Oyetola.

The statement titled: ‘Re: APC Members Demand Probe of Attacks on Aregbesola’s Aides,” said, “Wonders, they say, shall never end. We read the story with the above headline in a newspaper and on another platform. After reading the story, we knew their target was Governor Adegboyega Oyetola. But we love the ‘ignore them’ attitude of Mr Governor.

“Oyetola doesn’t give room for distractions. That’s the stuff of a man who is focused and determined to deliver on his goals and mission.

“The new group that was hurriedly put together to call for the probe is being chaired by someone who left from APC to the ADP and came back into the APC.

“These elements are only trying to create an issue where there is none, which is the stock-in-trade of Aregbesola. We believe that they are trying to draw Oyetola and his team out for a needless intellectual warfare.

“Only the blind and the deaf will not see and hear about the landmark achievements of Oyetola in the health, education, commerce and industry, agriculture, culture and tourism and the mining sectors. The mere fact that Oyetola is fixing roads, paying salaries and pensions as and when due, thereby changing the negative narratives that almost cost our party the election in 2018, is already endearing the party to the people in the state again.

“We strongly believe that these renegades trying to cause trouble at all cost within the party will not succeed. If indeed they are serious, they should channel their petition to the Police and leave the governor alone. Oyetola, please, continue to ignore them. Let the Police do their job.”