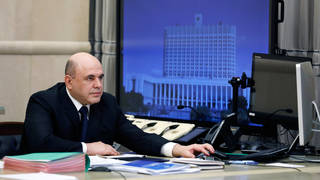 The news of his infection was announced on Thursday evening, live on national television, during a video link with President Vladimir Putin.

Mishustin, who replaced Dmitry Medvedev as Prime Minister in January, received the result of his test while at work.

Earlier in the day, he had headed a governmental session, conducted remotely.

He told President Putin, “It just became known that the tests that I’ve passed for coronavirus gave a positive result.

“In this regard, and in accordance with the requirements of Rospotrebnadzor, the national health watchdog, I must self-isolate and comply with the instructions of doctors: I have to do this to protect my colleagues.”

Responding, Putin said, “What’s happening to you now could happen to anyone.”

He assured Mishustin that no major decisions would be taken without his input while he battles the infection; noting that members of the government are at particular risk during the COVID-19 crisis, as direct contact with colleagues cannot be avoided.

The Prime Minister has been working from his office at Moscow’s ‘White House.’

Mishustin told Putin that his cabinet will continue working uninterrupted, adding that he’ll keep in touch with the president.

He added, “I’m planning to remain in active contact with my colleagues via phone and video conferences.”

The 54-year-old has played a major role, alongside Moscow Mayor Sergey Sobyanin, in Russia’s response to the pandemic.

The Prime Minister also appealed to Russians “to take most seriously,” the threat of coronavirus, encouraging everyone to stay home over the May holidays.

Recall that Russia normally has two major celebrations at this time of year – Labor Day on May 1 and the annual May 9 celebration of Soviet Russia’s World War Two victory over Germany.

It also informally marks the start of ‘dacha season’ in many parts of the country, with the roads traditionally packed as city dwellers head to their country boltholes.

Moscow daily, Vedomosti, revealed that the Prime Minister and all his deputies take daily tests for COVID-19.

Mishustin’s spokesman, Boris Belyakov, said that face-to-face communication between government members and the Prime Minister has been as limited as possible for the past few weeks, adding that the government will continue to work as usual and that next week’s meetings will be held as planned.

Belyakov also confirmed that Mishustin will be hospitalized.

Meanwhile, Putin has signed a decree making Belousov, a Moscow native, Luke Mishustin, who has served in various positions under Putin and Medevedev in the last two decades, interim head of government.

He has also been an economic advisor at the Kremlin since 2013.

Meanwhile, Sobyanin has indicated that the capital’s lockdown might be eased around the middle of May, provided the situation with COVID-19 doesn’t worsen.

This is just as authorities in the southern Krasnodar region hope to open the holiday season from June 1.

The country has introduced strict lockdown measures to stem the spread of the highly contagious disease.

Earlier in the week, President Putin said that the restrictions will be prolonged at least until May 11.