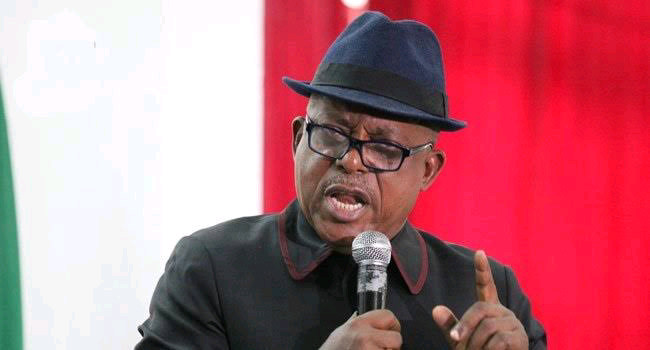 National Chairman of the Peoples Democratic Party, PDP, Uche Secondus, has charged state governors from other parties to borrow a leaf from PDP governors when it comes to delivering the dividends of democratlcy.

He said that it was only PDP governors who have the capacity and will power to transform Nigeria and provide opportunity to Nigerians to reap democratic dividends and take the country out of the economic hardship experienced by Nigerians.

The PDP Chairman stated that he and other party big wigs were in the state to send a signal to the state Governor Ben Ayade to make preparations on how to hand over the governorship to a PDP man in 2023.

Stressing that Governor Ayade had no doubt been regretting now, for dumping the party for the All Progress Congress, APC, which the PDP claimed had destroyed Nigeria, Secondus revealed that plans are in top gear by the PDP, led by former President of the Senate, Senator Bukola Saraki to ensure that PDP governors who left the party for one reason or the other returned to the fold without further ado.

Speaking at the event, Sokoto State Governor Aminu Tambulwa, assured Nigerians of the PDP’s willingness to restructure Nigeria, when a PDP man wins the presidential election to occupy the office of the president in 2023.

Tambuwal stressed that the wealth of experience gained by the PDP throughout the time the party served the nation in strategic and key positions remain as an asset, which would be applied to get the nation transformed, to give her a new lease of life for the betterment of Nigerians, better than what is obtainable now.

The chairman of the PDP Governors’ Forum, PDPGF, maintained that it’s only his party men who have the capacity to deliver the country from the shackles of poverty, which has bedeviled the nation, to restore the hope of young people.

Tambuwal averred that PDP governors are the only ones delivering the dividends of democracy at the moment, calling on other Nigerian governors to borrow and tap from the expertise of these PDP governors

He said, “PDP governors are delivering. We are determined to recover what rightly belongs to us. We are here on behalf of 14 PDP governors. PDP is the only party for today, tomorrow and the future.”

Former governor of Cross River State Mr. Donald Duke, who also stormed the venue alongside the crop of PDP governors, including one of the members of the three wise men, who is also a former governor of Cross River State, Senator Liyel Imoke, was given a rousing welcome by party faithful at the new party secretariat while he was being welcomed back to the PDP fold said, “I am back!”

However, former governor of Anambra State, Mr. Peter Obi, lamented how Cross River State, which used to be a reference point for other state governors, suddenly lost its glory, stressing that it was only the PDP which can revive the state and take it back to its once known status.