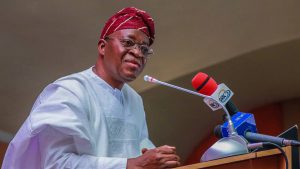 …Releases Another N50m For Gratuities

The Osun State governor, Mr Adegboyega Oyetola, has approved the immediate release of the sum of N500 million for the payment of entitlements to retired workers enrolled under the Contributory Pension Scheme, CPS.

This was made known by the the Osun State Head of Service, Dr Festus Olowogboyega, in a statement issued on Wednesday, February 5, in Osogbo, the State capital.
The statement added that the names of retired beneficiaries were picked on merit, saying that the process was monitored by the executive committee of the retired workers’ group.
Dr Olowogboyega said that names of the selected beneficiaries will be posted on the Notice Board of the State Pension Board on Thursday, 6 February, adding that bond certificates would be presented to the beneficiaries by Governor Oyetola on February 14.
In a related development, Governor Oyetola has also approved the release of another N50 million for the part payment of gratuities to retirees under the old pension scheme.
Dr Olowogboyega said 250 retirees, who have also been selected on merit would start receiving their cheques as from Thursday, February 6.
He disclosed that a list containing names of the beneficiary pensioners has already been posted on the Public Notice Board of the state Pension Board and that of the Ministry of Information.
Meanwhile, the state Pension Board has appreciated Governor Oyetola for the approval and for being sensitive to the plight of the pensioners and the workers in the state.

I’d Have Joined To Beat Jesus Christ To Pulp!