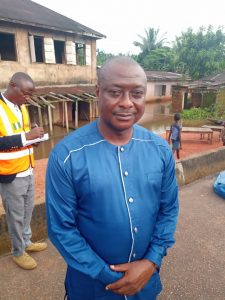 The Caretaker Chairman of Ese-Odo Local Government area of Ondo State, Hon. Ojo Omolewa, on Thursday, February 7, emerged as the flag bearer of the All Progressive Congress, APC, in the forthcoming state local government election.
The primary election, which held at the Igbekebo Town Hall in the headquarter of the local government, had Omolewa polling 199 votes to defeat Mr Messiah Allen, who came a distant second with seven votes; while Omolere Ojigi and Richard Omosehin both came third with five votes respectively.

While announcing the results, the APC Chairman in Ese-Odo Local Government Area, Mr Samuel Ajayi, thanked all the aspirants for being their peaceful conduct; even as he advised losers in the primary election to work with the winner to ensure that the party emerged victorious in the forthcoming local government election to be conducted by Ondo State Independent Electoral Commission, ODSIEC.

Expressing happiness at the orderly manner the election was conducted, a partyleader in Arogbo Ward of the local government, Richard Kekemeke, urged the winner to be magnanimous in victory.

In his reaction, the winner, Hon. Omolewa, praised the conduct of his party delegates and promised not to betray the trust reposed in him.

He said that the party chairman in Ese-Odo was directed by the state secretariat of the APC to conduct the election with the agreement of other aspirants.

He said, “I appreciate the good people of Ese Odo, with the confidence reposed in me, I will not disappoint them, because it’s like they were putting their future in my hands, I will make sure I add value to their lives in this local government.”

The representative of the ODSIEC for ESE Ondo Local Government, Mrs. Feyintola Ogunsipe, praised the delehates for the oeaceful manner they conducted themselves, even she also gave kudos to the security agents for their professionalism at the primary election.

Recall that ODSIEC had set April 18 for the conduct of elections into the 18 local government areas of the state.