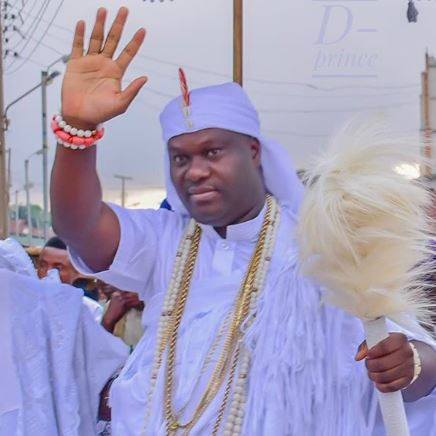 The Ooni of Ife, Oba Adeyeye Enitan Ogunwusi on Monday mediated in the crisis rocking the Ekiti State Council of Traditional Rulers, as he met with the state governor, Dr Kayode Fayemi, and some of the obas in Ado-Ekiti, the state capital.

The meeting, held behind closed doors at the Governor’s Office, Ado-Ekiti, had in attendance a renowned historian and Second Republic senator, Prof Banji Akintoye; and 11 traditional rulers, including the current chairman of Ekiti State Traditional Council, the Alawe of Ilawe Ekiti, Oba Adebanji Alabi; the Ewi of Ado Ekiti, Oba Adeyemo Adejugbe, the Oloye of Oye Ekiti, Oba Oluwole Ademolaju, the Ajero of Ijero Ekiti, Oba Adewole Adebayo, among others.

Earlier, Governor Fayemi, the Ooni and Prof Akintoye, had met briefly before the main meeting with the obas. Governor Fayemi described the parley with the traditional rulers as a “family meeting.”

Speaking to journalists shortly after the meeting, Oba Ogunwusi assured Nigerians and Ekiti people that the meeting succeeded in resolving the impasse that arose as a result of the traditional council’s chairmanship.

Commending Governor Fayemi for his efforts at ensuring that there was peace among the state traditional rulers by going to the extent of visiting the Alaafin of Oyo, Oba Lamidi Adeyemi, to explain his own side of the story, Oba Ogunwusi described the governor’s gesture as a honourable move that signified true leadership.

The Arole Oduduwa restated that there is mutual respect and synergy between people in government and the traditional council, adding that obas are still upholding the heritage, culture and tradition the forefathers handed over to them several thousand years ago.

Speaking on behalf of the traditional rulers, the Ewi of Ado-Ekiti, Oba Adejugbe and the Ajero of Ijero Ekiti, Oba Adebayo said they have resolved to suspend all litigations arising from the chairmanship and related issues.

The royal fathers explained that the issue was not resolve before now due to communication gap between them and government.