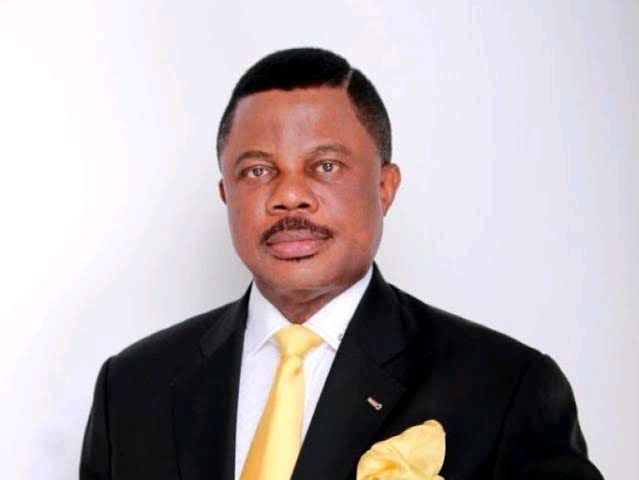 When Willie Obiano joined the governorship race on the platform of All Progressives Grand Alliance, APGA, in 2013, he was regarded as a tenderfoot in politics. That was, however, never an issue to Anambrarians, as they saw him as the right man for the job at the time.

Considering his background as a renowned banker and chartered accountant, who had worked hard to earn his stripes, many believed he was better positioned to ensure the effective and prudent management of the state’s resources for the benefit of the people. On that note, he easily won the election and was inaugurated on March 17, 2014.

He got re-elected and was sworn in for a second and final term on March 17, 2018.  Seven years in the saddle, Obiano is seen as having restored hope and brought joy to the people of Anambra State, with his creditable achievements, that are visible for everyone to see.

An aspirant on the platform of APGA for the November 6, 2021 governorship election in Anambra State, Nze Akachukwu Nwankpo, for instance, opined that Obiano has succeeded in setting a high standard for governance and leadership, thereby bringing about increased government efficiency and productivity in the state.

The APGA guber aspirant, a one-time special adviser on technical matters to former President Goodluck Jonathan, was quoted as saying, “Obiano has delivered an impressive leadership within a resounding seven years in office, with the kind of drive and passion that is almost unprecedented in the state’s contemporary history‎. He boats an enviably rich knowledge in good governance as evident in his performance sheet, seven years after. Whether in terms of style, a good grasp of issues or ability to provide leadership in crisis period, Obiano is miles ahead of his peers.

“Talk about articulation and presentation of policies, vision and mission as well as execution (enforcement is probably apt) – Obiano has always set the pace. He hasn’t made governance as well as leadership any easier for whoever is going to take over from him, regardless of the misgivings anyone may nurse. ‎He has set a benchmark for governance, birthed economic transformation, upped the ante of leadership and challenged creativity as much as productive thinking in government.”

Nwankpo described Obiano as “the progressive actualizer. He maintained and secured Anambra such that today, wealthy Anambrarians are all back home, investing hugely in the state; people can move about the streets of Anambra without the fear of the unknown. Ndi Anambra are now very proud of their state.

“History – from all indications – promises to be kind to Willie Obiano, who came at the nick of time to save the state from an orchestrated political misdirection, charted a path that completely redefined both the development and the politics of progressivism. In the next one year, Willie Obiano will hand over a legacy of incontrovertibly good governance to his successor.”

A chieftain of the Peoples Democratic Party, PDP, Dr. Obiora Okonkwo, disagreed with Nwankpo, maintaining that the governor has done nothing impressive to show for his seven years in office.

According to Okonkwo, a PDP aspirant for the Anambra guber poll, “Roughly 10 years ago, Anambra was widely acclaimed as having the best intra-state network of roads in the country. Today, very sadly, most of those roads have fallen into major disrepair, due to abandonment and poor maintenance culture. Good roads, functional public hospitals, pipe-borne water, regular power supply, good public transportation, among others are just the basics any serious government should help provide for its people. Today, very tragically, our people have been so dehumanized by decades of poor governance that we now settle for crumbs from our governments.”

But the Speaker of the state House of Assembly, Rt Hon Uche Okafor, said there is no gainsaying the fact that Obiano has done excellently well. He asserted that the governor recorded tremendous development in all sectors of the state economy, plus the unprecedented security, which his administration has provided for Anambra citizens.

In his goodwill message to the governor, Okafor maintained that Obiano distinguished himself among his predecessors via the prudent management of state’s resources.

Applauding the governor for endearing himself into the heart of Anambra civil servants through prompt payment of salaries and pensions, the Speaker further argued that Governor Obiano has uplifted the image of the state, by also building legacy projects like the International Cargo Airport, Umueri; International Conference Centre, Awka and the International Stadium, Awka, among other manifold valuable projects.

He charged politicians in the state to put politics aside and desist from unwarranted condemnation of the performing governor. What is expected of them, according to the Speaker, is to give him the utmost support for the sustained peace and progress of the state, regardless of political party affiliations.

The Joint National Association of Persons with Disabilities, JONAPWD, equally lauded the governor over his seven years of impactful, pragmatic and purposeful leadership.

Celebrating Obiano in a press statement signed by its chairman, Comrade Ugovhukwu Oke, the Anambra chapter of JONAPWD noted that in the past seven years of piloting the affairs of the state, Obiano has impacted the lives of people with disabilities with legislation, empowerment, training and employment into the state civil service.

The statement reads, “We, the Joint National Association of Persons with Disabilities JONAPWD, Anambra State chapter, heartily celebrate our amiable governor, His Excellency, Chief Dr. Willie Maduaburochukwu Obiano, Oguguo Ndi Olusi, as he marks his seventh year in office as the governor of Anambra State. It has been seven good years of selfless service and utmost dedication to the welfare of Ndi Anambra, especially persons with disabilities.

“Your Excellency, your love for persons with disabilities in Anambra State is unparalleled. Thus, on 18th December, 2018, you gave a life-time Christmas gift to PWDs in the state, with the signing of the Disability Rights Bill into law, thereby changing the issue of disability rights from a subject of charity to an object of right. This has ensured the safety of PWDs against all forms of discrimination, intimidation and marginalization. It has also ensured the socio-political inclusion of PWDs in the state.

“Also, you have not only given persons with disabilities in the state a voice in your cabinet, but a vote with the appointment of a special adviser on disability matters. Thus, you have ensured that issues concerning PWDs receives prompt executive attention, thereby fulfilling the provisions in Article 29 of CRPD, SDGs Goal 10 (indicator 10.2) and Section 52 of Anambra Disabilities Rights Law 2018.”

Describing Obiano as a caring governor, Okeke added, “You have demonstrated your concern for the economic welfare of PWDs with the appointment of over 200 qualified PWDs into the state civil service in 2017 and 2020 respectively, as provided for in section 41(1) ASDRL 2018, Article 27 of CRPD and SDGs goal 8 (indicator 8.3). This has put smiles on the faces of the beneficiaries as they are now able to take care of their needs and those of their families.

“Frankly speaking, Your Excellency, you have demonstrated in no small measures your belief that a society is known by the way it treats its weak ones. You have demonstrated your belief that, indeed, there is ability in every disability. The inclusion of persons with disabilities issues in your 2021 budget speech and increasing budget provision to take care of the needs of persons with disabilities was deliberate, not for any political reason. Your recent approval for the set up of the Anambra State Disabilities Rights Law Implementation Committee, which will at interim before the establishment of the Disability Rights Commission, as provided for in section 3 of the ASDRL 2018, will forever remain evergreen in our heart.”

The Chief Press Secretary, CPS, to the governor, James Eze, in different informative articles, written in series, gave deep insight into the various laudable achievements of his principal in the last seven years.

Reeling out the governor’s remarkable feats, in one of his write-ups, Eze, a seasoned journalist, declared that Obiano has engraved indelible hoof prints in all sectors – healthcare, provision of infrastructure, agriculture, education, industrialization, electricity supply, construction of roads and bridges.

Accentuating the governor’s commitment to build roads and bridges that would evidently be of great economic benefits to the people, Eze, a former literary editor of a national newspaper, said, “Governor Obiano has completed 15 bridges across the three senatorial zones of Anambra State. They include the three flyovers in Awka and Amawbia and other bridges like the Nengo River Bridge, the Iyiora Bridge, the Ebenebe-Amansea-Ugbene-Ugbenu Bridge, the Umueje Oil Rig Bridge as well as the Kisa River Bridge in Umunya, the SARS Awkuzu Abube-Nando Bridge, Ndiukwuenu-Awa-Ufuma bridges (they are three), the Ezira-Umuomaku-Enugu Umuonyia Bridge and the Section 2 Mmiata Anam-Nzam Bridge. All these bridges have become outstanding legacies of the Obiano administration. However the 280 meters-long Aguleri Uno Aguleri-Otu bridge that leads to the oilfields of Anambra State stands out as the longest bridge in South East Nigeria and a monument to an administration that is committed to making Anambra State fulfil its enormous potentials. No previous administration ever paid this much attention to the importance of linking up diverse communities split apart by nature with modern bridges.

He further revealed that “the Obiano administration has awarded a total of 53 roads contracts in Anambra South and completed 11 of them. Some of the roads awarded and completed by the administration in Anambra South include the Oye Utu-Akwuata-Court road in Nnewi South, the Chukwuemeka Odumegwu Ojukwu University eoad, Uli in Ihiala and the Ebenato Udene-Amichi road. In Anambra Central, the administration awarded a total of 76 roads and completed 20 of them. Some of the roads completed in Anambra Central senatorial zone include the Commonwealth Road-Anyaoku Street-Mbidebe Enweozor Street-Afor Adike market road Obosi, the Agbaja Abatete-Oraukwu/Alor Junction road and the Ebube Muo Nso-Blessed Iwene Tansi Parish eoad, Umudioka as well as the Eke-Uke Market-Uke Maternity road.

“But perhaps what is even most fascinating about the aggressive construction of roads and bridges in Anambra by the Obiano administration is the little surprise for opposition elements, who have always argued that Governor Obiano had abandoned all road projects he inherited from his predecessor. The records from the Ministry of Works show that out of the 97 roads Governor Obiano inherited when he took over, he has actually completed 54 of them while the rest are still undergoing construction. Some key roads that Obiano inherited from his predecessor and faithfully completed in fulfilment of the continuity mandate include: the Ekwulobia-Ezinifite road, Ndiokwu-Amikpa-Oki Umuchu road, Nsogwu Umunze road, Igboukuwu-Ekwulumili road by Grand Star, the Justice Nwazota, Oraifite, St Theresa’s road, St Peter’s Nnewichi, Oguonu road, Ozubulu, the Oye Neni-Adazi nnukwu-Akwaeze Igboukwu road and finally the Umunamehi Road in Ihiala among many others.”