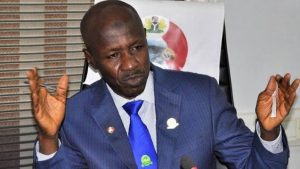 The acting Chairman of the Economic and Financial Crimes Commission, EFCC, Mr Ibrahim Magu, has said that no high profile individual in Nigeria would shielded from prosecution for corruption.

This assurance from the anti-gradt agency came against the backdrop of complaints by the immediate past President of the Senate, Dr. Bukola Saraki, of being witch hunted by the Commission, especially with his properties being partially forfeited to the government.

Speaking in Ilorin, the EFCC acting Chairman said there would be a massive fight against corruption in Nigeria in 2020.

Magu had embarked on a tour of the EFCC zonal offices around the country, including Ilorin zonal office in a bid to further ensure efficiency in the system.

He said, “All of them would be arraigned as soon as investigations are concluded. There is going to be a massive fight against corruption this year.”

According to him, the campaign against corruption had just started, noting that more looters would be repatriated back to the country for prosecution.

“Part of President Muhammadu Buhari’s agenda on his visit to London is to seek the support of international bodies in the extradition of looters hiding in foreign countries,” he said.

He further disclosed that establishing the EFCC Ilorin Zonal Office became pertinent due to the status of the state as one of the first generation states created in 1967.
His words, “I am going round the zonal offices to make sure everything is under control for effective performance and I always get in touch on a daily basis.”

He, however, said that the fight against corruption goes beyond the EFCC alone, urging the media to give suggestions and advice at all times, for better service to the people.

He also disclosed that there would be massive protests against corruption on February 14, in collaboration with members of the National Youth Service Corps, NYSC across the country.

Ekiti Kicks Off Palliatives For COVID-19