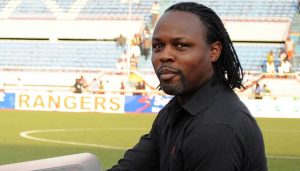 NFF chairman, Alhaji Ibrahim Musa Gusau, alleged that the conduct of the Delta State FA election was a violation of the provisions of football statutes, adding that the Delta State FA had been enmeshed in crisis, which had lingered on despite attempts and efforts to settle the conflict.
He said the Delta FA elections which produced Ikpeba as the state FA vice chairman infringes on the provisions of football statutes.
In a statement issued by the NFF Media Department and signed by Ademola Olajide, Gusau, said, “Early last year, the board of the Delta State Football Association wrote a petition against the acting Chairman, bordering on various allegations, and eventually held a congress where the members suspended the acting Chairman. The NFF took note of the decision, because process adopted complied with the laid down regulations for such to happen.
“We gave them ample time to fully resolve the crisis and conduct fresh elections in full adherence to the guidelines provided by the NFF statutes and the electoral code. But they could not.
“We were later informed that elections were conducted and a board had emerged. There was no way elections could have been conducted in such miasma of crisis. The so-called elections did not follow the guidelines and the NFF cannot allow such to stand.
“The term of the board, of which Mr. Augustine Okocha was chairman, and which later appointed Mr. Edema Fuludu as acting chairman, expired more than five months ago, without the quagmire being conclusively resolved.
“Delta FA is an affiliate of the NFF. Our position is that it is the football stakeholders in Delta State, and particularly those who are eligible to vote in the FA elections, who will elect people into the Delta State Football Association, and not the entire stakeholders in the South-South zone.”
While expressing surprise that the 1997 African Player of the Year, Ikpeba, who seconded the motion for the suspension of Fuludu – a 1994 Africa Cup of Nations winner with the Super Eagles – is the same man now claiming to have been elected as vice chairman, the NFF boss disclosed that the federation has set up a body called Normalisation Committee to pilot the affairs of Delta State Football Association following the “long-drawn intractable crisis that bedeviled that affiliate.”